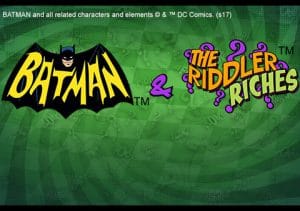 WHERE TO PLAY Batman & The Riddler Riches SLOT

Playtech has taken another trip to Gotham City, this time pitting the Caped Crusader against Edward E. Nigma, in Batman and The Riddler Riches. It’s a 5 reel, 243 ways to win jackpot slot that’s played using a collapsing reels game engine. Also on offer are mystery symbol transformations, free spins with multipliers or sticky wilds and a pick ’em feature. Play from between 25p and £60 per spin.

Like the other video slots in this series, Batman and The Riddler Riches is based on the 1960s incarnation of the millionaire superhero. High camp and slapstick action is the order of the day. Symbols on show include Batman’s utility belt, a statue and the Riddler’s bowler hat and gloves.

They’re joined by Chief O’Hara, Robin, Batman and the Riddler himself who is the top payer, awarding 500 coins if you land a 5-symbol combination. The Bat logo is the wild – it can hit on reels 2, 3, 4 and 5 only and substitutes for everything with the exception of the scatter.

The reel set up offers 243 ways to win with successful combinations formed when the same symbol lands on adjacent reels. The game is played using a Collapsing Reels feature so after every winning spin, the successful symbols are removed and replaced by the symbols above to create a new combination. These collapses continue as long as a new winning configuration is created.

The first of the features we’ll look at is the Mystery Spin feature which can be triggered on any spin in the main game and sees the Riddler add mystery ? symbols to the reels. They will all then magically transform into the same symbol. If it’s a high value symbol and it creates a nice match, some very tidy rewards are possible here.

Land the Bonus symbol on reels 1, 2 and 3 on the same spin and you’ll be given the opportunity to spin the Batman vs. The Riddler Bonus Wheel. This offers 3 potential features – which 1 you’ll receive depends on where the pointer lands:

Multiplier Free Spins feature – trigger this and you’ll receive 10 free spins. The collapsing reels are in play during this feature. After each successful collapse win, a multiplier will be applied to your payout. You’ll start with the standard 1x which rises to 2x, 3x and finally 5x after each subsequent win.

Sticky Wild Free Spins feature – another haul of 10 free spins is awarded if you trigger this round. If you land a wild and it forms part of a winner, the wild will be frozen on the reels for up to 3 collapses. You can land multiple wilds on the same free spin here which can prove very lucrative.

The Riddler Box Bonus feature – this is a classic pick ’em round. You’ll be shown 12 boxes behind each of which lies a coin bonus. Keep picking until you land 3 of the same and that’s the amount you’ll be awarded. You can also boost your payouts with multipliers in this feature too.

Batman and The Riddler Riches is part of the DC Super Heroes Jackpot network – this can strike at random on any spin and deliver a Mini, Minor, Major or Grand Jackpot.

This series of 60s, crime-fighting capers have all been real entertainers and Batman and The Riddler Riches is no exception. The design is excellent – the visuals are straight from the classic TV show and the soundtrack is an ideal match. Combine that with a neat range of features and this game is a very playable and enjoyable addition to the super hero genre. For reviews on the 3 other Batman video slots, visit our dedicated Playtech section.