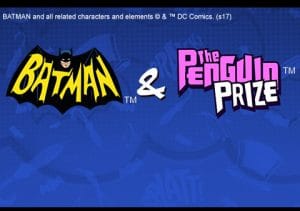 WHERE TO PLAY Batman & The Penguin Prize SLOT

The Caped Crusader takes on the wonderfully named DC supervillain Oswald Chesterfield Cobblepot aka The Penguin in Batman & The Penguin Prize. Played using an unusual reel set that offers 64 ways to win the base game and 4,096 on the respins, it comes with giant 3×3 symbols that can deliver equally enormous results. Head to Gotham City, on all devices, from between 25p and £125 per spin.

Batman & The Penguin Prize is based on the camp TV incarnation played by Adam West. Batman is joined by the Penguin and trusty sidekick Robin on the reels. Rounding out the symbols are a Batarang, a statue, a brolly, a top hat and butler Alfred.

While the other video slots in Playtech’s Caped Crusader series come with a variety of extras, there’s only one to speak of in Batman & The Penguin Prize. The main game is played on a 3 reel, 4 row machine that offers 64 ways to won. If you land a winning line, you’ll trigger the Penguin Respins feature and receive a respin on the matching reel set to the right. Land a winning combination featuring the Penguin and you’ll trigger another respin.

Penguin Respin 2 is played out on a new 6 reel, 4 row machine, complete with 2×2 Super symbols. Instead of 64 ways to win, this respin offers a mighty 4,096 ways to win! Land a winner that includes the Penguin here and you’ll get another respin.

Penguin Respin 3 is also played out using a 4,096 ways to win game engine. This respin features giant 3×3 Mega symbols which can deliver similarly hefty payouts. After the third respin has played out or following any unsuccessful spin, you’ll return to the base game.

This is Batman’s simplest outing in this series of video slots from Playtech as the only feature on offer is the respin. As it triggers following every successful spin, you can expect to see it land often. The best winning chances will come via respins 2 and 3 where the giant 2×2 and 3×3 symbols can quickly get the coins flowing.

Design-wise, Batman & The Penguin Prize is as accomplished the other games in this range. It looks terrific and comes with a typically swinging, 60s soundtrack. We found the features to be slightly disappointing though – the respins are good enough but we’d have liked to have seen a little something extra.

Batman & The Penguin Prize is a perfectly serviceable game though – it looks and sounds great and the respins provide plenty of action. If you’re after similar high class design but with a wider range of extras, we’d point you in the direction of Batman & The Riddler Riches.