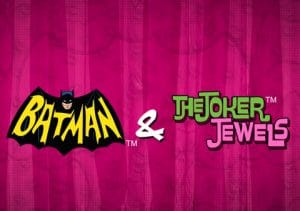 WHERE TO PLAY Batman & The Joker Jewels SLOT

The Caped Crusader takes on a grinning supervillain in Batman & The Joker Jewels, a 5 reel, 25 payline video slot from Playtech. Look out as the Joker can add up to 9 extra wilds onto the reels on any spin. Also on offer is a free spins feature with expanding multipliers that can top 5x. Stakes range from between 25p and £2,500 per spin.

Don’t expect to see the brooding Christian Bale era Batman here – the action is based on the cult 1960s TV series starring Adam West as Batman. He’s joined on the reels by Boy Wonder Robin (Burt Ward) and The Joker (Cesar Romero). All 3 characters can land stacked with Batman is the most rewarding of the 3, offering payouts of up to 500 coins.

Instead of playing cards, the lower value symbols all relate to the TV series and include the bat boomerang, the famous utility belt, chattering false teeth, a fake pistol, the Batmobile and the Batbike.

The game features 2 wilds – the Batman logo and the Joker logo. Both replace all other symbols with the exception of the scatter and offer payouts of up to 2,500 coins. Just 2 on a payline will get you a payout, albeit of just 2 coins.

Wilds are central to 1 of the 2 main features on offer in the game. On any spin the Joker Random Wilds feature can hit. Up to 9 extra wilds are added to the reels, greatly enhancing your chances of landing a winning combo.

Land the Bonus symbol on the odd numbered reels (1, 3 and 5) on the same spin and you’ll trigger the Batman vs The Joker Free Games feature where you have to choose whether to add a 5x multiplier to the Batman or Joker side of the multiplier meter.

Keep an eye on the joint Batman/Joker wild in the feature – whenever it hits, an arrow will point towards Batman or the Joker and move the multiplier by 1 in that direction. The multipliers on offer are 1x, 2x, 3x on both sides but 5x on your chosen side. You get to keep on spinning until you reach the collect on the multiplier meter.

Serious money is on offer in Batman & The Joker Jewels via the DC Super Heroes Jackpot – this can randomly hit on any spin. You’ll then be taken to a new screen and presented with 20 icons. Behind each 1 lies a colour which relates to 1 of 4 progressive prizes. Pick 2 greens and you’ll win the Mini, 3 blues and it’s the Minor, 4 yellows will get you the Major with 5 reds awarding the Grand which offers the potential megabucks.

Playtech has created another entertainer in Batman & The Joker Jewels – the sound and visuals have a strong 60s feel, complete with some classic scenes from the TV show. The gameplay stacks up rather well too with both the added wilds and free spins with multipliers offering some solid winning potential. It may not be quite as explosive Batman & Catwoman Cash but the latest trip to Gotham City is one well worth making.