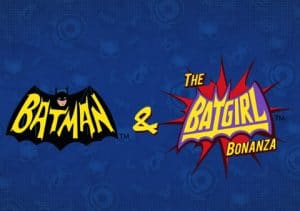 WHERE TO PLAY Batman & The Batgirl Bonanza SLOT

Enjoy a camp, sixties, crime-fighting caper in Batman and The Batgirl Bonanza, a 5 reel, 60 payline jackpot slot from Playtech. This trip to Gotham City comes with re-spins with frozen symbols as well as a bonus feature that awards between 12 and 25 free spins. Join the Caped Crusader and chums from between 30p and £30 per spin.

Batman and The Batgirl Bonanza is based on the cult TV show which featured Adam West as the millionaire superhero. In this outing, he’s joined by his usual sidekick Robin as well as Batgirl. These 3 character symbols can all land fully stacked.

They can also combine (Batman and Robin, Batman and Batgirl, Robin and Batgirl) and represent either symbol in a winning combination. Rounding out the symbols are a baterang, a utility belt, statue, walkie talkie, Batgirl’s motorcycle and Batman’s silver-haired butler Alfred.

The famous Batman logo is the game’s wild. It can substitute for all other symbols with the exception of the scatter. Land 3, 4 or 5 of these on a payline for a payout of 30, 100 or 2,000 coins. The first time you fire up this game, you’ll notice that the game engine is a bit of a departure from the norm. Reels 1 and 2 are just 2 rows high while the remaining 3 reels are 4 rows high.

The short reels on the left-hand side are central to 1 of the game’s 2 main features. If the same symbol fills all 4 positions on reels 1 and 2, you’ll trigger the Batgirl Locked Respins feature. Those 4 can be single symbols, double character symbols, wilds or any combination of the 3. You’ll then be given 5 respins with the 4 triggering symbols frozen in position for the duration.

Batman and the Batgirl Bonanza also comes with a Batman Team-Up Free Games feature which is triggered by landing the Bonus symbol on reels 3, 4 and 5. A clip from the TV show follows (which you can skip if you wish). You’ll then be transported to a new screen and offered a choice of 12 tiles.

Behind each 1 lies Robin, Batgirl or Batman – start picking. Each selection will be added to the relevant meter. If you pick 3 Robins, you’ll receive 12 free spins. If you fill the meter with 4 Batgirls, the award is 17 free spins. Best of all is finding 5 Batmans which will get you an impressive tally of 25 free spins. On each free spin, the first 2 reels are made up entirely of giant 2×2 symbols which certainly help move things along.

Rounding out the extras is a progressive jackpot element. The game is part of the DC Comics Super Hero network which can hit at random on any spin and award 1 of 4 jackpot prizes.

This is another entertaining outing for Bruce Wayne and co. The sixties style design complete with a groovy baby soundtrack make this a very easy game to play. As far as features go, expect to see the Batgirl Locked Respins feature far more often than the free spins. The locked respins hit at regular intervals and can provide a nice base game boost.

The bigger wins will tend to come from the Batman Team-Up Free Games feature though where the giant symbols offer plenty of potential. With top notch design and some tidy features, Batman and The Batgirl Bonanza is a highly entertaining video slot and ideal if you like your superheroes to come with a big slice of camp. You should try Playtech’s other Batman themed titles with Batman & The Riddler Riches recommended.