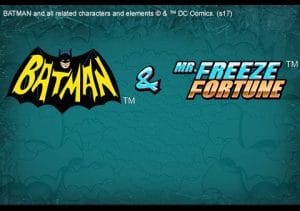 Gotham City’s finest faces his chilliest challenge yet in Batman & Mr Freeze Fortune. Available to play on all devices, Playtech’s latest superhero themed video slot is a 5 reel, 1,024 ways to win game. Look out for Mr Freeze’s Polar Prize Vault which offers wild multipliers, win multipliers of up to 10x, transforming symbols and wild re-spins. Also on offer is a bonus feature that awards 10, 12 or 15 free spins with wild multipliers. Play from between £1 and £5,000 per spin.

The design in Batman & Mr Freeze Riches is as high end as you’d expect – based on the cult 60s TV show starring Adam West, the reels include a baterang, Batman’s utility belt, a statue, hotline to Wayne Mansion, ray gun, Batmobile and helicopter. The top paying symbols are Robin, Mr Freeze and Batman himself who awards 300 coins if you land 5 in a row. There’s also a wild that replaces everything bar the bonus scatter.

The base game is played using a 1,024 ways to win reel set up. Land the same symbol on adjacent reels to create a winner. In the middle of the reels, you’ll notice a locked cross – this is Mr Freeze’s Polar Prize Vault. It can open at random on any base game spin and deliver 1 of 4 special features:

Look out for the bonus scatter during the base game too – landing 3, 4 or 5 of them on the same spin will trigger the Batman vs Mr Freeze Free Games feature and with it, 10, 12 or 15 free spins. Mr Freeze’s Prize Vault isn’t open for business here but the free spins are played out on an expanded 2,400 ways to win game engine. Winning lines that include a wild are boosted by a multiplier that can top 5x. The multipliers can combine to offers boosts of up to 25x!

Batman & Mr Freeze Fortune also offers a shot at winning 1 of 4 progressive jackpots. This can trigger randomly on any spin. Pick from the matrix and you could pocket the Mini, Minor, Major or Grand Jackpot with the latter making you an instant millionaire.

This latest outing for the Caped Crusader is another corker. The design is top notch and the Hammond organ-style soundtrack for the 60s theme. Batman & Mr Freeze Fortune isn’t just a pretty face though – there’s plenty of action too. The mini features from Mr Freeze’s Polar Prize Vault provide regular base game boosts. The free spins are a little harder to come by but the wild multipliers can soon get the cashier flying.

Playtech’s latest superhero range has delivered a succession of winning slots and Batman & Mr Freeze Fortune is up there with the best of them. Combining great design with some top features, this is another fine outing for the Caped Crusader.