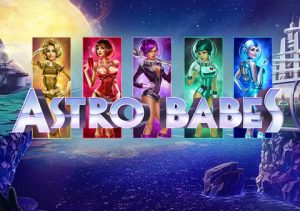 WHERE TO PLAY Astro Babes SLOT

Enjoy some glamorous, space age adventure in Astro Babes, a 5 reel, 8 row, 100 payline video slot from Playtech. This sci-fi-themed game comes with symbols that become wild when they land fully stacked. Also on offer is a bonus round that awards 12, 20 or 50 free spins complete with even more stacked wilds opportunities. Blast off on all devices from between £1 and £500 per spin.

The theme here may be futuristic but there’s a slight retro feel to the visuals in Astro Babes. It’s a bit like how the future was supposed to look in a 1950s movie. The setting is a launchpad and rocket base on a remote planet. The reels are made up of first aid kits, oxygen tanks, stun guns and walkie talkies.

The higher value symbols are Gwen, Betsy, Violet, Roxy and Bonny who are known collectively as the Astro Babes. Bonny is the best of the gang, offering 25, 80 or 800 coins if you land 3, 4 or 5 on a payline.

Land 1 of the Astro Babes fully stacked in the base game and you’ll trigger the Astro Wild feature – she will then magically transforms into a wild. That’s in addition to the standard gold wild that delivers payouts of 80, 500 or 5,000 coins if you land 3, 4 or 5 on a line.

The main offering, the Hyperspace Delivery Bonus feature is triggered by landing 3 or more of the spaceship scatter anywhere on the same spin. Find 3, 4 or 5 and you’ll receive 12, 20 or 50 free spins respectively. The Astro Babes developer some magical powers during the feature – when they land, they nudge up or down to fill the whole reel. You can expect to see many more stacked wilds in the feature than in the base game.

That’s pretty much it as far as extras go – the game’s 100 payline, win all ways game engine delivers a steady stream of action in the base game. The best winning chances come via the bonus round though. The free spins aren’t the easiest to trigger but the potential from the extra stacked wilds means it can be worth the frustrating waits.

We’d put the variance on the high side of medium. With a high minimum bet of £1 it’s probably not a video slot for micro stakes players. Saying that, you could get up to 5 wild reels on every base game and free spin which would result in a prize of 5,000 times your total bet.

The design here is excellent. The visuals are crystal clear and beautifully drawn and there’s a hypnotic backing track playing as you spin. If you’re after a video slot that offers plenty of extras then Astro Babes might not be for you. For simple gameplay, high spec sound and visuals and a potentially explosive feature then this space adventure is well worth a look. I also recommend you try some of Playtech’s other offerings with Justice League and Da Vinci’s Vault recommended.