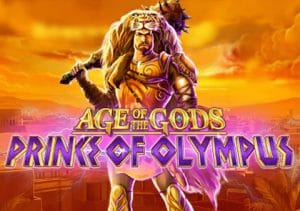 Age of the Gods Prince of Olympus: Demo

WHERE TO PLAY Age of the Gods Prince of Olympus SLOT

Mythical strongman Hercules takes centre stage in Age of the Gods Prince of Olympus, a 5 reel, 25 payline video slot from Playtech. This Greek legend themed game comes with a bonus feature that awards 10 free spins with all wins trebled. That’s not all as you’ll also find re-spins with expanding wilds, a pick me battle bonus that offers cash and multipliers as well as a shot at 4 progressive jackpots. Playable on desktop, mobile and tablet devices, join the battle from between 25p and £500 per spin.

Set within a pair of golden columns the reels in Prince of Olympus have a classical feel – joining the lower value playing cards are a club, a magical belt, golden apples and the three-headed dog Cerberus. You only need to find 2 of the higher value symbols to create a winning combination. Land 5 of the 3-headed dog for a 4,000 coin payout.

The golden Hercules symbol is the game’s wild – it can only land on the middle 3 reels. If it hits in the central position on reel 3, you’ll trigger the Herculean Strength feature and be awarded 2 re-spins with a stacked sticky wild. If Hercules lands on reels 2, 3 and 4 simultaneously, you can look forward to a single re-spin with no fewer than 3 frozen stacked wilds! Needless to say, this can deliver some mighty results.

Land the Bonus symbol on reels 1 and 5 to trigger the Hydra Bonus feature which pits Hercules into battle with a fearsome sea monster. Every time an arrow hits the creature’s head, you’ll win a cash prize. Slash the Hydra and your win will be boosted by a multiplier. The randomly triggered Hercules Rage feature destroys all of the Hydra heads and can produce a flurry of coins.

Rounding out the features is the Free Games feature which is activated by landing 3 or more of the Hercules logo symbol anywhere on the reels. Here you can look forward to 10 free spins complete with a 3x multiplier which trebles all payouts. You can re-trigger more free spins here as well (giving you 20) as the Herculean Strength feature.

Finally, there’s the randomly triggered progressive jackpot round – here you’ll be given a pick of 20 golden coins. Keep on choosing until you find 3 that reveal the same jackpot. You’re guaranteed to win 1 of the Power, Extra Power, Super Power or Ultimate Power jackpots with the latter being life-changing.

As you can see, there’s plenty of action on offer here – boasting impressive graphics and animations and a sweeping soundtrack, it all adds up to a very entertaining overall package. The ancient Gods have been a favourite theme for slots developers – Age of the Gods Prince of Olympus is a good one. For your reference, it’s essentially Marvel’s The Incredible Hulk rebranded. I also recommend you try some of the other Age of the Gods series games with Age of the Gods King of Olympus a good option.