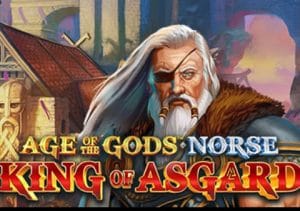 Age of the Gods Norse King of Asgard: Demo

Playtech has foregone the togas of ancient Greece and headed to chillier climes for the first release in the Age of the Gods Norse series, King of Asgard. It’s a 6 reel, 50 payline slot. The setting might be different but you can expect the usual combination of high-class sound and visuals as well as explosive gameplay. The highlight is Odin’s Fury Respins feature which comes with an expanding multiplier. You could also land 1 of 3 jackpot prizes. Available to play on all devices, stakes here range from between 10p and £500 per spin.

Like their ancient Greek equivalents, the design in Age of the Gods Norse: King of Asgard is very impressively done. Set against a backdrop of a hilltop castle shrouded in cloud, the reels include lower value rune stone as well as a serpent, ravens, a wolf and a monster. The best standard symbol is the Norse god. Land 2, 3, 4, 5 or 6 of these on a payline and you’ll pocket a payout of 0.1, 0.4, 0.8, 3 or 8 times your total bet.

Odin, who sports a luxuriant white beard and an eye patch, is the wild. He offers the same awards as the top paying Norse god symbol. As usual, the wild substitutes for all the standard symbols.

Hope to land a fully stacked Odin wild as it triggers the Odin’s Fury Respins feature. You’ll then be awarded an undefined number of respins. On each respin, the stacked Odin wild shifts 1 reel to the left. The respins keep on coming until Odin reaches reel 1.

Each shift also increases a multiplier by 1x. Joining the action here is Loki. Each time 1 of these symbols appear, it pushes Odin to the right. This effectively adds extra respins to your total as well as boosting the multiplier. That multiplier is applied to your total win after your final respin.

Age of the Gods: Norse jackpots

You’ll also have a shot at landing a potential jackpot prize. This round can trigger at random. You could then win the Daily Jackpot, Extra Jackpot and Ultimate Power Jackpot. The one you want is the latter as this starts at £100,000 and usually pay out a lot more.

The Age of the Gods slots have proved to be a huge hit. We expect the Norse-themed spin off series to prove very popular too and Age of the Gods Norse: King of Asgard is a very solid debut. The sound and visuals are very well constructed and the gameplay, though rather simple, has its charms.

The respins can be well worth landing if Loki adds to your tally and gets the multipliers spinning. Each spin can land you a 400 x bet win – if you got a 4x multiplier from the respins, you could theoretically win 1,600 x your total bet. The multiplier has no limits as Loki can push back the Odin wild reel untold times. The RTP is 94.56%, rising to 96.67% if you include the jackpot contribution.