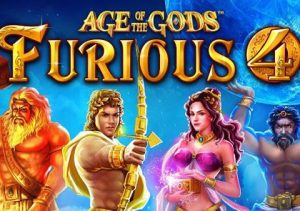 Age of the Gods Furious 4: Demo

WHERE TO PLAY Age of the Gods Furious 4 SLOT

The theme may be mythical but the payouts can be legendary in Age of the Gods Furious 4, a 5 reel, 20 payline progressive jackpot slot from Playtech. This particular ancient adventure comes with a feature that offers 12 free spins as well as a range of expanding and sticky wilds, frozen stacked symbols and expanding multipliers. Available to play on desktop, mobile and tablet devices, stakes range between 20p and £500 per spin.

Apollo, Pandora, Hephaestus and Atlas are the Furious 4 – they appear in the base game but really come into their own during the bonus feature with is Furious 4’s finest feature (try saying that after a sherry or three!).

To trigger that Free Games feature, you’ll need to land 3 or more of the scatter – the golden throne. You can then look forward to 12 free spins, complete with some very tasty added extras. These specials are activated when 1 of the 4 gods lands fully stacked on the middle reel.

Apollo: Age of Light feature – you will be given 4 extra spins where Apollo is wild. And not just a standard wild – he’ll expand to fill the entire reel in which he appears.

Pandora: Age of Curiosity feature – once again, 4 extra spins are awarded. This time a multiplier will be boosted by 1x every time Pandora lands during these special spins. This final multiplier will then be added to the total from all of your free spins when the feature ends (not just the 4 extras).

Hephaestus: Age of Fire feature – Hephaestus will appear as a stacked symbol on reel 1 during your 4 extra spins. Apollo, Pandora and Atlas are removed from the reels with extra Hephaestus symbols. This may not sound the most exciting of extras but can deliver some spectacular results.

Atlas: Age of Endurance feature – 3 spins are awarded when Atlas fills the central reel. Whenever the strongman lands during these extra spins, he’ll remain frozen in place and remain that way for all of the free spins that follow, not just the 3 Age of Endurance spins.

Even better is when you manage to land multiple bonuses on the same initial set of free spins. Some massive results are possible in this happy circumstance.

Age of the Gods Furious 4 also offers a series of progressive jackpots – these are triggered at random and can hit on any spin. You’ll then be presented with a grid of 20 coins – choose until you land 3 of that match. There are 4 in all, of varying sizes and you’re guaranteed to win at least one of them. The Ultimate Power jackpot is potentially life-changing!

On the variance scale, we found it to be in the medium range – the Free Games feature was something of a feast or fortune affair. We hit it on a regular basis and the rewards ranged from the miniscule to the seriously impressive.