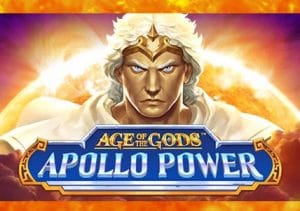 WHERE TO PLAY Age of the Gods: Apollo Power SLOT

Another release in Playtech’s popular myth and legend-themed jackpot video slots series is Age of the Gods: Apollo Power. Played using a 6 reel, 50 payline game engine, it comes with a respins round where trails of wilds are added. You’ll also have a shot at landing a potentially massive progressive prize. Play on all devices from 50p per spin.

Head to a cloud-filled red sky

The design in Age of the Gods: Apollo Power is simply done. Set against a cloud-filled red sky, you’ll see A to J symbols as well as gold rings, laurel wreaths, harps, bow and arrow and swords. The best of the standard symbols is Apollo himself. Land 3, 4, 5 or 6 of the Greek God in combination and you’ll pocket a prize of 0.8, 2, 5 or 12 times your bet. There’s also a standard wild that replaces all the standard symbols. This can be lucrative in its own right too, paying 1, 2, 6 or 20 times your bet if you land 3, 4, 5 or 6 on a payline.

Land a wild and it triggers the Apollo Power Respins feature. The standard wild is joined by the sun wild which moves with each respin and leaves an extra wild in its path. The respins continue until the sun wild returns to its original position.

Age of the Gods: Apollo Power is part of the Age of the Gods jackpot network. The Jackpot feature can trigger at random on any spin. You’ll then be taken to a new screen when you’ll be offered the pick of 20 coins which are housed within a marble columned building.

Behind each coin is a jackpot symbol. Land 3 that match and that’s the jackpot that you’ll win. You’re guaranteed to hit one of the Power, Extra, Super or Ultimate Jackpots once you trigger the round. The latter is the biggest and often life changing.

Age of the Gods: Apollo Power is one of the most straightforward video slots in the Age of the Gods series. The design is as high spec as you’d expect and is very nicely dull. The limited range of extras might this sound like a rather dull game. The respins come along regularly and the spreading wilds can deliver some very decent action – up to 1,000 times your bet per spin or respin.