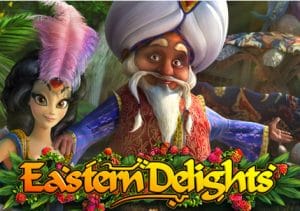 WHERE TO PLAY Eastern Delights SLOT

Get ready to tuck into a sumptuous Asian feast in Eastern Delights, a beautifully designed 5 reel, 21 payline slot from Playson. This treat for the senses doesn’t just look good though – it comes with symbol drop re-spins and a free spins bonus round. Look out too for the magic lamp which can make all of the symbols on a horizontal row disappear and in the process create an extra drop. Available across all devices, feast at this banquet from between 21p and £105 per spin.

A maharajah’s palace is the opulent setting for Eastern Delights which looks delicious – surrounded by lush, green vegetation, the reels include stylised playing cards from A to 10 alongside pitchers full of drink, a selection of fruit, a peacock and a platter of food – land 5 of the latter 2 symbols for a payout of 1,500 times your line bet. The question mark symbol is the wild, substituting for everything bar the scatter and magic lamp.

The imagery is superb – the haunting, Indian style soundtrack is equally impressive and adds a certain something to the atmosphere as you spin. A gold star for the Playson design bods then.

You’ll notice that Eastern Delights uses Symbol Drop technology – if you land a successful spin, the winning symbols will disappear and be replaced by the ones directly above. These symbol drops keep on coming as long as there’s a winning combination on show. You can get up to 3 free spins here if you manage 4 drops in succession.

There is also a traditional Free Spins feature which is triggered by landing 3 of the scatter symbol – you’ll be awarded an initial 4 free spins. The symbol drop feature is in play during the feature so there are plenty of opportunities to add to that somewhat skinny total. A maximum of 50 free spins can be won here though.

Keep a special eye on reel 5 during the free spins – lf the lamp lands, it will blast away all the symbols on the row in which it appears to create another symbol drop.

Eastern Delights may be easy on the eye but it can be tough on the pocket for long stretches – this a pretty volatile slot. If you can cope with the swings, it’s a very playable offering though with decent winning opportunities available if you get on a good roll with the symbol drops.

Boasting stunning visuals and a nice range of features, Eastern Delights can certainly live up to the latter part of its name if the Maharajah is feeling generous. I also recommend you try Playtech’s Sultan’s Gold which has a similar theme and is highly volatile. If you like Playson offerings, Dracula’s Family is very good.