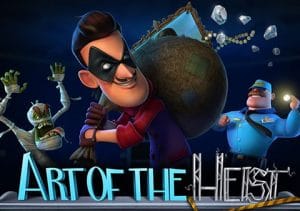 Art of the Heist: Demo

WHERE TO PLAY Art of the Heist SLOT

Enjoy some cartoon crime capers in Art of the Heist, a 5 reel, 21 payline video slot from Playson. Progress along the Robber’s Pathway to win free spins. There’s also a Cluedo-style bonus round where opening rooms delivers cash prizes. Stakes range, oddly, from between 21p and £63 per spin.

The action in Art of the Heist centres on thief Vincenzo who’s trying to make off with a museum’s treasures. Visually, it’s very nicely done. Set within an old museum, you’ll see A to J royal values, a walkie talkie, a security guard, a bandaged mummy, a statue and crown.

They’re joined by a treasure chest which is the wild and a painting which is the scatter – land 3, 4 or 5 of them on the same spin and you’ll receive an award of 40, 100 or 300 times your stake as well as activating the Bonus Game feature.

The goal here is make off with the museum’s priceless painting and in the process, win some very tasty bonuses. You’ll start with 7 keys which you can use to try and open 15 rooms. In each room, awards of 4 or 5 times your stake are on offer. Find extra keys and you’ll get to pick extra rooms.

Watch out for the security guards though as you’ll lose a life when you enter a room and find 1 there. Locate the painting and a bonus prize of 20 times your stake is awarded. If you have any keys left at the end of the feature, they will be multiplied by your total stake as another bonus prize.

You’ll notice a pathway behind the reels. Vincenzo interacts with other symbols to advance. Whenever Vincenzo and a walkie talkie symbol appear, the thief will move 1, 2 or 3 steps along the path. Any wilds that land add 1 or 2 free spins to your total when the Free Spins feature is eventually triggered when he reaches the end of the pathway.

You’ll trigger the Free Spins feature immediately if you see Vincenzo together with the painting scatter. Hope to avoid the mummy as he’ll send Vincenzo back 2 spaces. If he lands with the security guard, he’ll be detained for 3 spins. That means he won’t be able to interact with other symbols and move along the trail.

When our man does reach his destination, you’ll receive 10 free spins plus any extras collected via the wilds. Helping your chances during the free spins are stacked wilds which come into play.

This art-themed video slot looks a treat. We think the features are something of an acquired taste though. They’re not the easiest to land but can deliver well when they do hit. We wouldn’t describe Art of the Heist as a masterpiece.

It’s certainly worth a view if you’re looking for a game that combines plenty of backstory with high spec design and very unusual features. I would much rather play Alice in Wonderslots or Dracula’s Family (both by Playson) which offer bigger rewards.