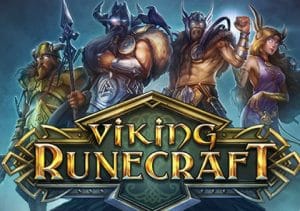 WHERE TO PLAY Viking Runecraft SLOT

Play’ N Go video slots are usually well designed and Viking Runecraft certainly impresses visually – a wintry mountain forms the backdrop to the grid which is made up of 5 lower value rune symbols, a necklace, axe, hammer and Viking helmet as well as a quartet of wilds based on a legendary figure of Norse mythology.

To create a winning combination, you’ll need to land 5 matching symbols in a line, either vertically or horizontally. Those symbols are then blasted away from the grid and replaced by the symbols above. These cascades continue as long as a new winning line is formed.

Each winning line helps charge up the meter which is situated to the side of the reels – once it is fully charged, you can look forward to winning 1 of the Charge of Destruction extras.

Fury of Fenrir feature – 2 lines of symbols are removed from the grid and 2 other lines morph and are filled with the same matching symbol. A new payout consideration is then made.

Judgment of Jörmungandr feature – a number of symbols on the grid are destroyed at random, stretching from 1 edge of the grid to the other. A path is then created between the 2 edges which is filled by the same matching symbol.

Scorching of Surtr feature – 3 randomly chosen symbols are set alight. The flaming symbols can set fire to those close by. All of the lit symbols are then destroyed. They are replaced by a new cluster, all of which feature the same matching symbol.

Once the modifier extra has done its stuff, you’ll return to the usual base game. If you manage to charge the meter after 1 of these 4 extras, you’ll trigger the Ragnarök feature which awards 1 free spin. Here the Charge of Destruction meter is replaced by the End of the World Bonus meter.

The game also offer 4 special wild extras which are based on the Norse gods – these extras are triggered by landing a specific winning combination or at random following an unsuccessful spin:

Finally, there’s the Runes of Valhalla feature – each winning combination helps to trigger this. Once you do, you’ll spin a wheel and win a cash bonus.

There are plenty of features on offer here. That combined with the slightly unusual gameplay means that it can take a little time to get your eye in. Demo play is your friend at first. Once you have become accustomed to the grid set up and the range of extras, there’s plenty to enjoy here. Viking Runecraft is a volatile game with possible wins of up to 5,000 times your stake on each spin!

There’s a great range of extras on offer here making it a good choice is you like plenty of variety in your play. It’s probably not one for fans of old school fruities say. The design, as usual from Play ‘N Go, is high-end. Combined with an innovative range of features and some volatile gameplay, it all adds up to make Viking Runecraft an impressive overall package. If Norse mythology is appealing, you cannot go wrong with the cult favourite Thunderstruck II from Microgaming.