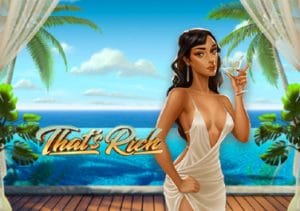 WHERE TO PLAY That’s Rich SLOT

Join the international jet set and their blingy lifestyle in That’s Rich, a luxury-themed slot from Play ‘n GO. Played using a 5 reel, 10 payline game engine, the undoubted highlight of this slot vacation is the bonus round. On offer are  free spins with each one of the guaranteed to deliver a winning combination. Also boosting your chances here are wilds which increase a multiplier by 1x whenever they hit. These expanding wilds with multipliers can send payouts rocketing by up to 20x. Did this flashy slot win us over? Found out in our That’s Rich review.

Play ‘n GO has kept things relatively simple as far as the gameplay in the That’s Rich slot is concerned. With 3 bonus features in total, the main offering (the Win Spins feature) offers plenty of potential.

Before we get stuck into the main offering, it’s worth mentioning the Expanding Wilds feature. If a wild symbol lands during the base game, it can expand and fill the whole reel. This won’t happen every time but can provide a timely boost when it does. Each time a wild symbol hits in the bonus round, it will expand and turn the whole reel wild.

To trigger the Win Spins feature, you’ll need to land 3 or more scatter symbols anywhere on the reels on the same spin. You’ll then receive 5 free win spins. As their name suggests, you’re guaranteed to land at least one winning combination on each win spin.

An allocation of 5 free spins doesn’t sound the most generous. There are plenty of opportunities to add to that tally though. Each time a scatter symbol lands during the feature, 2 more free spins are added, up to a maximum of 20 win spins.

Any winning combination that includes a wild gets boosted by the value of the current multiplier. On your final free spin, you could be a 20x wild multiplier randomly applied.

The 5 reel, 3 row game engine includes 10 paylines. The stake limits vary from a minimum of 10p, right up to a maximum of £100 per spin. Whether you’re a high roller or a min bet player, there are levels to suit.

You can vary your bet levels with a single click of the mouse on the game screen. Autoplay is available too if you just what to sit back and watch the action.

Play ‘n GO usually like to ramp up the volatility in their slots. That’s Rich isn’t quite as fiery as some of the developer’s other releases, but you’d still describe it as a high variance game. The RTP is a solid 96.27%. The maximum win is 10,000 x your bet on each win spin including a 20x multiplier.

There’s plenty of shine in the That’s Rich mobile version. Bar a slight tweak to the game interface, the design in the tablet and mobile versions is identical to the desktop set up. The visuals work just fine on smaller screens. You won’t lose anything by playing on a handheld device.

As you’d expect from a slot called That’s Rich, there’s a luxurious feel to the design here. The reels are set against the view from a beautiful seaside apartment. We’re talking a luxury pad in the Caribbean or the Med and not a beach hut in Skegness (apologies Skegness).

On the reels you’ll see A to 10 symbols alongside shoes and handbags, a Grand Designs-style house, a luxury yacht, piles of cash and a glossy magazine cover. Land 5 of the latter in combination for an award of 40x your bet.

The famous woman in the white dress is the wild. She substitutes for everything apart from the scatter (the gold trophy) and can appear on all 5 reels. Land 5 wilds on a payline and you’ll pocket an award of some 50x your bet.

There’s a suitably glossy, high spec sheen to the visuals here. The game interface is neat and crisp too. You can set autoplay and stake levels without having to leave the game page. Click on the ‘i’ button for the paytable and setting. It’s all very straightforward which is just what we’ve come to expect from Play ‘n GO slots.

Slots with the luxury lifestyle theme are often rather simple in terms of gameplay and features. That’s true of That’s Rich which comes with simple bonus features. The Win Spins feature is well worth waiting for though, especially if you manage to get a few re-triggers and boost the multiplier wilds.

This is a straightforward but typically volatile slot from Play n’ GO. The blingy theme won’t be for everyone but the bonus round makes it worth a closer look. And with potential top payouts of some 10,000 x your bet, That’s Rich can live up to its name.

If you want luxury, you should try Piggy Riches by NetEnt – which is all about rich pigs. There’s also Piggy Riches Megaways which is revamped version using the popular mechanic.

❓ What is the That’s Rich RTP?

🥇 What is the That’s Rich slot maximum payout?

That’s Rich can live up to its name thanks to potential maximum payouts of some 10,000 x your bet. At the highest stake levels that means that prizes could reach up to £1,000,000!

🎰 What are the That’s Rich slot bonus features?

The main feature is the Win Spins feature. You’ll play at least 5 free spins that are guaranteed winners. Look out for expanding wilds and wild multipliers which can boost payouts by up to 20x. Each scatter that lands during the feature adds 1 more free spin to your total.

⚡ Can I play That’s Rich for free?

Yes – CasinoManual.co.uk offers free play version of all slots, including That’s Rich. This allows you to try the games before you go on to play for real money. You can also read in-depth and expert reviews.