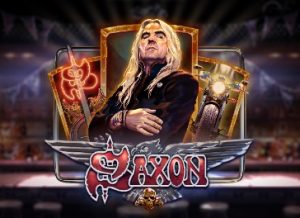 WHERE TO PLAY Saxon SLOT

Play ‘n GO is inviting slots players to rock out once again with another game based on heavy metal royalty. The latest music-themed release is the Saxon slot, a 5 reel, 10 payline title which takes inspiration from the veteran Yorkshire rockers of the same name. Land a full stack of the same symbol to increase a multiplier by 1x (2x for a stack of wilds). There’s also a Free Spins feature that awards free spins with multipliers carrying over from free spin to free spin. Is this slot a smash hit? Find out in our detailed Saxon review. There’s a fair chance that a good proportion of people reading this review will have never heard of Saxon. For the uninitiated, the Saxon heavy metal band formed in Barnsley in South Yorkshire in the late 1970s and went on to release a string of top 40 albums. They’re still touring and releasing new material as we write.

As you might expect for a slot based on a heavy metal band, there’s a dark, gritty look to the design in the Saxon slot. You’ll hear a medley of Saxon hits playing in the background while you spin.

With a bar in the background, the reels are made up of lower value playing card suit symbols as well as more rewarding symbols that relate to the theme. They include eagle crests and leather jackets emblazoned with the Saxon logo. Land 5 of these on a payline for an award of 30x bet.

More rewarding still is the neon Saxon logo which is the wild. This pays up to 50 x bet per payline as well as substituting for all the standard symbols. The scatters are the motorbike and the lead singer, the wonderfully named Biff Byford.

To get the full Saxon effect, you need to turn the volume up to 11. In which case, you probably want to play the game on a laptop or PC with decent speakers rather than a mobile. The simple gameplay and dark design are suitable enough for a mobile device though.

The Saxon slot uses a simple 5 reel, 3 row, 10 payline layout. Landing 3 or more matching symbols in a payline (just 2 for the 3 highest paying symbols) from left to right creates a winner.

Bet levels range from between 10p and £100 per spin. Play ‘n GO’s usual autoplay options are available here. You can run up to 100 autospins if you wish. There are also options so the autoplay ends when you trigger the free spins round if you win or lose specified amounts. It’s dead simple to set up. Likewise, playing in turbo mode. Just click on the lightning bolt in the left-hand corner of the screen.

You’d hope a slot with a loud metal theme to be a pretty lively one when it comes to variance and Saxon doesn’t disappoint on that score. The Saxon volatility is in the medium to high range. On a scale of 1 to 10 we’d put the Saxon volatility at 8. The wins can be quite hard to come by but they can be a decent size when they do hit.

There are 2 main extras in this heavy metal-themed slot. First, stacked symbols deliver multipliers. Trigger the bonus round for free spins where even more multipliers are possible. To trigger that Free Spins feature, you’ll need to land the singer and motorcycle scatter symbols on the same spin. You’ll then receive a random allocation of free spins which can be anything from between 5 and 15.

The win multiplier is held across each free spin throughout the round so it doesn’t drop to 1x on each reel on each free spin. Landing the singer and motorcycle scatters during the bonus round results in a retrigger and another allocation of between 5 and 15 free spins. There’s no limit to how many times you can retrigger.

Saxon Thoughts/Opinion – a must play for heavy metal fans

As neither a Saxon nor a heavy metal fan, it would take quite a bit to win us round to a slot based on the band. The stacked symbols, multipliers and a free spins are a solid enough combination, especially when you factor in the high win potential of 10,000 x bet per spin. It’s still not quite enough to make us firm fans though.

If you enjoy the heavy rock theme, we’re sure you’ll enjoy the Saxon slot. For those with rather more delicate ears, you might prefer something a little quieter. NetEnt’s Jimi Hendrix slot may be more to your liking.

What is the Saxon RTP?

The Saxon return to player rate is 96.24% which is slightly above average. It’s medium to high variance (8/10) so don’t expect big wins often.

What is the Saxon max payout?

The most you can win from a single spin is 10,000 x your total bet. The chances of winning big come if the multipliers work their magic which can happen in the base game and Free Spins feature.

Is there a Saxon Free Spins feature?

Yes. The Free Spins feature starts with up to 15 free spins. The win multiplier is held on each free spin and can only increase during the feature. You can also win an unlimited number of additional free spins.

Saxon are a British heavy metal band that enjoyed plenty of success in the 1980s. They still have a cult following today. They have sold over 13 million albums worldwide.