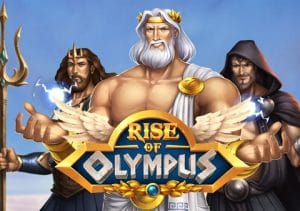 WHERE TO PLAY Rise of Olympus SLOT

Super high variance and a myth and legend theme are what’s on offer in Rise of Olympus, an ancient-Greek themed video slot from Play ’N Go. Played using a 5×5 tumbling reels game engine, it comes with expanding multipliers, added wilds and transforming symbol modifiers, respins and free spins with multipliers that can reach a whopping 20x. Stakes range from between 20p and £100 per spin.

As we’ve come to expect from a Play ’N Go game, the visuals here are superbly done. Flanked by ruined marble columns and watch over by Hades, Poseidon or Zeus, the reels include tridents, helmets and lightning bolts as well as the 3 aforementioned Greek gods. These all pay 10 times your bet if you land 5 in combination. The coin is the wild.

Land 3 or more matching symbols vertically or horizontally to create a winner. Those symbols are then removed from play and new ones drop down and replace them. This tumble also increases a multiplier by 1. The tumbles (and multipliers) continue as long as a new winning combination hits. The tumbling reels aren’t all that’s on offer here though. There’s a good range of extras to get stuck into too.

Hand of God feature – this can become active on any winless spins. Depending on which god is active (you can see the animated figure to the right of the reels), you’ll benefit from 1 of the following extras:

Wrath of Olympus feature – every time you land 3, 4 or 5 in a row combination featuring 1 of the 3 gods, you’ll fill up a meter. Once a meter is filled, you’ll be awarded a free spin. The 3 Hand of Modifiers hit in turn on this free spin and on the subsequent tumbles that follow.

The tumbling reels are in play during the free spins too. Better still, the multiplier doesn’t reset at the end of losing tumble. Get on a roll here and multipliers of up to 20x are possible. Landing god symbols once again charges the meter which can add more free spins to your total – up to 20 possible. Clear the grid during the feature and a 100 times bet bonus will be heading your way.

As we mentioned in the intro, Rise of Olympus is a very high variance video slot – on a scale of 1 to 10, we’re talking 10. Saying that, you can win up to 5,000 times your bet on each free spin! If you can cope with the extreme volatility, then there’s plenty to enjoy here. The visuals are typically well done and the range of extras offers lots of variety.

The ancient Greek theme is an enduringly popular one. With impressive arrivals like Rise of Olympus, it’s easy to see why. I also suggest you take a look at Playtech’s Age of the Gods series as Athena, Zeus, Poseidon, Hercules, Lachesis, Clotho, Atropos, Pandora, Atlas, Hephaestus, Apollo and Pegasus all feature.