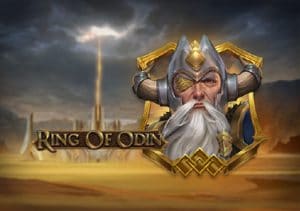 WHERE TO PLAY Ring of Odin SLOT

Norse myth and legend is the theme on offer on the Ring of Odin slot . Created by Play ‘n GO, it’s a 5 reel, 10 payline game that comes with a quartet of bonus features. These offer an assortment of re-spins, mega symbols and free spins where multipliers can send payouts rocketing by up to 9x. Boasting the developer’s usual high-class design, let’s see what the gods have in store for us in our detailed Ring of Odin review.

There is an assortment of Ring of Odin bonus features. They’re not the most straightforward features though. You won’t find the standard pick me rounds and cash trails. Instead, there’s a rather complicated range of re-spins and free spins.

On any base game spin. you could see Odin’s gold ring appear in the central position on reel 3. The symbol that lands in the gold ring on that spin becomes the so-called ‘chosen symbol’. A re-spin then follows.

Odin can use his magical powers to add up to 8 extra gold rings onto the middle 3 reels. A standard payout calculation is made. 1 re-spin is then awarded for each of the ‘chosen symbols’ that have landed in the collection of gold rings. This in turn, activates the Drupnir Re-spins which we’ll expand on below.

If you don’t land any of the ‘chosen symbol’ in the gold rings during the re-spins, the feature is complete and you’ll head back to the base game.

During the re-spins, the chosen symbols morph into a giant 3×3 Mega Symbol which is the equivalent of 9 standard symbols. This sticks on the middle 3 reels throughout the round.

If the scatter is the chosen symbol and lands in a gold ring, you’ll activate the Multiplier Free Spins feature with 4 free spins.  Each scatter that lands in the gold rings during the re-spins adds to a multiplier when the free spins round begins. This can boost payouts by up to 9x. Each scatter appearing during the feature will add 1 more free spin to your tally.

You can trigger the Foresight Free Spins feature by landing the scatter symbol on reels 1, 3 and 5 on the same spin in the base game. You’ll start the round with 4 free spins. The Odin’s Ring feature is active on each of them. 1 extra free spin is added to your total every time a scatter symbol lands.

The Ring of Odin slot has 5 reels, 3 rows and 10 paylines. With a classic video slot configuration, you form wins by landing 3 or more matching symbols across any of the 10 paylines, beginning from reel 1. Stakes range from between 10p and £100 per spin.

Click on the gold button next to the green spin button for Autoplay. If you want to step up the pace, click on the lightning bolt symbol in panel in the bottom left-hand corner of the screen to activate turbo mode.

The Ring of Odin RTP is a reasonable 96.2%. Play ‘n GO has made a big name for itself by delivering super volatile slots. They’ve dialed things back slightly here though. The variance is still north of medium but it’s not enormously high. On a scale of 1 to 10 we’d rate the Ring of Odin volatility at 7.

The maximum win per spin, re-spin or free spin is 5,000 x your total bet. This can be achieved by getting a screen full of the highest value symbol. There are other ways to achieve this as you have a potential 9x multiplier from the Multiplier Free Spins feature.

Ring of Odin Theme – fantastic imagery for this Norse saga

This recreation of the mythical Norse world is very finely crafted. With mountains in the background, the reels are guarded by a pair of mighty statues.

There you’ll find 4 lower value rune stones, two wolves, a pair of ravens and the 8-legged horse Sleipnir. Odin’s sword Gungnir is the best of the standard symbols. This pays 4, 10 or 50 x your total bet if you land 3, 4 or 5 on 1 of the game’s paylines, starting from reel 1.

Those same amounts are on offer from Odin which is the wild. He can appear on all 5 reels and substitute for all the standard symbols when he forms part of a winning combination. Odin’s all-seeing eye is the scatter symbol.

The symbols are superbly drawn and could come straight out of a comic book or a high-class fantasy-themed movie animation.

Playing on a small screen doesn’t conjure up quite the atmosphere you’ll find playing on a desktop device. The design is still very good though. The imagery is sharp and crisp and easy to follow. It’s a fine mobile adaptation.

The gameplay in the Ring of Odin slot isn’t the most straightforward. The combination of gold rings, chosen symbols, re-spins and free spins is more complex than you’ll find in many slots. That makes it unique and appealing in my opinion.

The Ring of Odin gameplay is good once you’ve got your eye in though. The design here is terrific too. You won’t see many better-looking slots than this. The Norse theme has become one of the most popular genres in the slot world. Ring of Odin is another solid addition, albeit a rather complicated one.

Filling all symbol positions with Odin’s sword (Gungnir) or the wild will give you a 5,000 x bet payout. With the potential 9x multiplier, you could win 45,000 x your bet in theory. Play ‘n GO has capped the max win at 5,000 x your bet which is the only disappointing element to Ring of Odin.

If you like Norse sagas, there are plenty of slots to choose from. For bonus features, Vikings Go Berzerk from Yggdrasil Gaming is a good option. I recommend the iconic Thunderstruck II by Microgaming which has stood the test of time since it’s release in May 2010.

❓ What is the Ring of Odin theme?

Norse myth and legend is the theme in Ring of Odin. It’s been very well recreated by Play ‘n GO thanks to some superb design which works well on desktop, mobile and tablet devices.

🥇 What is the Ring of Odin RTP?

The Ring of Odin return to player rate is 96.2% – this is about average for an online slot game. The variance is 7/10 (medium to high) with plenty of small wins in the base game and bigger wins coming from the multipliers.

The return to player for Ring of Odin is a very reasonable 96.47%. On average, for every £100 you put in, you’ll get £96.47 back. The majority of wins will come from the Reactions feature with the bigger wins coming from the Wild Multipliers feature.

🎰 What is the Ring of Odin max payout?

The max payout from a Ring of Odin spin is 5,000 x your bet. You can achieve this by filling the reels with the Gungnir sword symbol or with the multipliers up to 9x.

⚡ What are the Ring of Odin bonus features?

The Ring of Odin features are a little unusual. You’ll find a combination of special symbols, mega symbols, re-spins and free spins. You can boost your wins during the free spins round with multipliers that can send payouts rocketing by up to 9x.