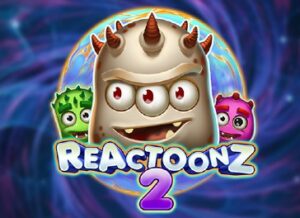 WHERE TO PLAY Reactoonz 2 SLOT

Play ‘n GO cartoon critters are back for a second out in the Reactoonz 2 slot. This follow up to the 2017 original has been given a visual makeover and is played on a 7×7 cascading reels grid. This cluster pays slot comes with a variety of extras. These include Electric Wilds which can help you create more winning combinations by zapping symbols to create new cascades. Win with a Fluctuating symbol and it’s added to the Fluctometer. Once full, this adds Electric Wilds onto the reels. There’s also a Quantumeter that can bring 2×2 and 3×3 wilds into play as well as multipliers. Discover more about this volatile slot in our in-depth Reactoonz 2 review. 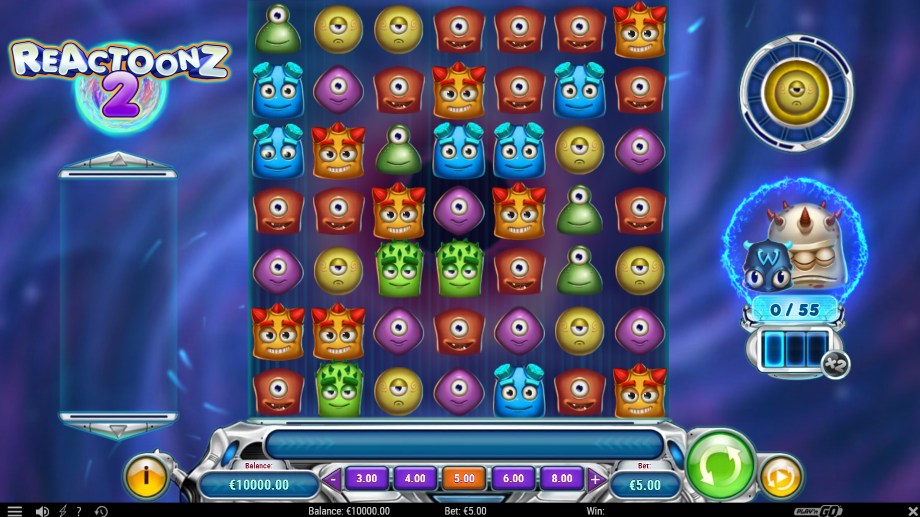 The bright and colourful design in the Reactoonz 2 slot is nicely done. With a space theme, there’s a cartoon quality to the visuals which impress. It’s simple enough but works well.

The reels are made up of 4 lower paying one-eyed Goon symbols and 4 more rewarding Reactoonz. The best of them is the boss-eyed pink Reactoon. Land a cluster of 15 or more of these in combination for an award of 500 x your total bet.

The blue orb is the uncharged wild. This doesn’t count for anything but can spark into life courtesy of the Electric Wilds while we’ll look at in more detail below.

You can play Reactoonz 2 on desktop, tablet and mobile devices. With its 7×7 game grid and colourful designed, the Reactoonz 2 mobile slot has the look of a classic social media style game. The imagery is nice and sharp, even on a smaller screen.

The Reactoonz 2 slot game is played on a 7×7 grid. Winning combinations are formed by landing 5 or more matching symbols in a horizontal or vertical (but not diagonal) cluster. The more symbols in the cluster, the bigger the reward.

You can play this sequel at bet levels that range from between 20p and £100 per spin. Autoplay is available if required. So too is turbo mode. Just click on the lightning bolt to bring this into play.

In Reactoonz 2, the gameplay is rather complicated. A classic fruit machine this ain’t. Instead, you’ll find cluster pays, an assortment of meters which can deliver special wilds that comes with some magical properties attached. We’ll start by looking at the game engine.

Once you’ve formed a winning cluster, the Cascading feature applies. After the payout has been made, a cascade follows. The original winning symbols are removed from the grid and new ones replace them. The cascades continue as long as a new winner is formed.

In each new spin or cascade, a one-eyed symbol fluctuates. If this fluctuating symbols makes up part of a winning cluster, it creates an Electric Wild that can appear in any of the vacated symbol positions.

Electric Wilds substitute for all Reactoonz. They can also zap and remove any matching Goons elsewhere on the grid to further boost your winning chances. 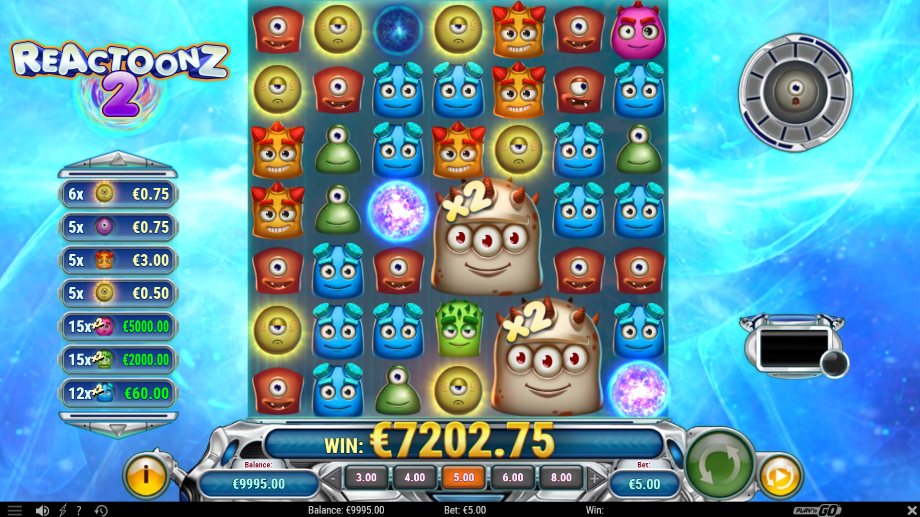 The Quantumeter is charged every time an Electric Wild is part of a winning cluster or it zaps one of the Reactoonz. Each symbol added counts as 1 charge. There are 3 different Charge levels which deliver a variety of potential rewards.

If you reach Charge Level 3, a  Gargantoon Wild is added. If you make it to Level 4, you won’t recharged but you will bring a 2x multiplier into play. Here’s what happens: 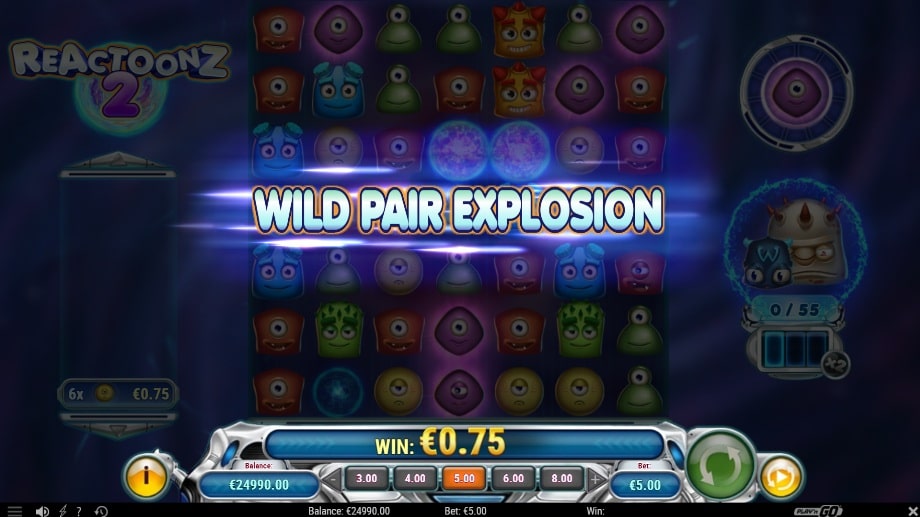 The Wild Pair Explosion feature triggers if you manage to land 2 Electric Wilds on the same spin. There are 3 possible scenarios:

We usual recommend giving a slot game a few spins in free play mode, just to get used to the gameplay. That’s a must with the Reactoonz 2 slot. The cascading reels and assortment of wild extras certainly take a little getting used to.

Especially when you factor in the Fluctometer, Quantumeter, Energoon and Gargantoon wilds. It’s all rather complicated so try demo mode first if you can. Once you start playing, you will see it’s simpler than it reads.

With its unusual gameplay, we expect this to be something of a Marmite slot. Basically, you need to get plenty of winning clusters which will bring the various wilds into play. The key to big wins come from the 2x multiplier offered by reaching Level 4 in the Quantumeter.

Players will either love it or hate this game. If you enjoyed the original Reactoonz slot, you’ll probably be in the former category when it comes to Reactoonz 2.

What is the Reactoonz 2 RTP?

Like many of Play ‘n GO’s slot game, the Reactoonz 2 return to player rate is 96.2% which is just above the video slot average. The variance is 8/10 so medium to high.

What is the Reactoonz 2 max win?

The most you can win from the Reactoonz 2 slot is 3,000 x your total bet per spin. The key to winning big comes by reaching Level 4 in the Quantumeter where there’s a doubling multiplier for all wins.

Is there a Reactoonz 2 free spins feature?

No, you won’t find a traditional free spins feature here. There’s no shortage of action though thanks to the cascading reels which trigger following each winning spin. There are plenty of wild extras to get stuck into too which also help keep the pace high.

The Quantumeter feature has 4 levels. When you charge them, Energoon Wilds up to 2×2 in size and Gargantoon Wilds up to 3×3 are added to the reels. In level 4, a 2x multiplier also comes into play.