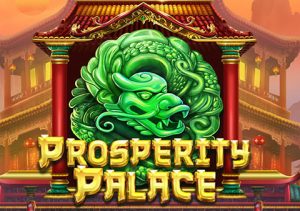 WHERE TO PLAY Prosperity Palace SLOT

Join a pair of Chinese twins in the Prosperity Palace, a 5 reel, 10 payline video slot from Play ’N Go. The highlight of this Asian adventure is the feature round which awards up to 20 free spins complete with a second wild symbol. Start your quest from between 10p and £100 per spin.

Visually, Prosperity Palace is simple but very nicely constructed. The reels are built within a pair of red palace columns. There you’ll see lower value A to 10 royal symbols as well as gold coins. The most rewarding symbols are the male and female twins, each of whom is perched on top of a fish and having a whale of a time. The little girl is the top payer, offering 5, 50, 200 of 1,000 coins for a 2, 3, 4 or 5 symbol combination.

That scatter is the smiling Buddha – he can land on reels 1, 3 and 5 only. Land 3 of them on the same spin to trigger the game’s Free Spins feature and with it, 10 free spins. Once again, the Buddha appears on the odd numbered reels only. This time though, it acts as a second wild and replaces all other symbols. The Buddha wild comes in addition to the standard dragon wild.

That’s pretty much it as far as gameplay is concerned. There’s a gamble round if you’re feeling lucky but that’s your lot. Simplicity is at the heart of Prosperity Palace, both in terms of design and features. The visuals are super sharp and very nicely put together. As is the traditional Asian soundtrack that accompanies you as you play. It is a low variance title but does offer potential payouts of 5,000 times your bet on every spin.

For simple, Chinese-themed action, it’s worth taking a quick trip to the Prosperity Palace. Fans of video slots with plenty of variety would be better served looking elsewhere – such as Grim Muerto or Viking Runecraft (both by Play ‘N Go).