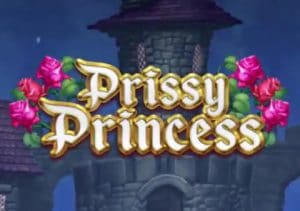 WHERE TO PLAY Prissy Princess SLOT

Winning the hand of a medieval maiden (and a big win or 2) is the name of the game in Prissy Princess, a 5 reel, 20 payline video slot from Play ‘N Go. Featuring the Scandi developer’s usual high end design, it comes with a tumbling reels game engine, random and stacked wilds and a multi-level pick me bonus. Take on the fire-breathing dragon, on desktop, mobile and tablet devices, from between 20p and £100 per spin.

As we’ve come to expect from Play ‘N Go, the design here is impressive – the reels are set within a pair of turrets guarding a medieval castle, each symbol is encased within stone which combine to excellent visual effect – the lower value symbols include weapons, suits of armour, swords, shields and face masks. They’re joined by 3 gallant knights who award up to 15 times your stake if you land 5 on a payline.

The Prissy Princess herself is the game’s standard wild – she replaces all other symbols apart from the royal banners which are the scatters. 5 wilds on a payline will get you 50 times your total bet. There is plenty to get stuck into as far as gameplay is concerned in Prissy Princess:

Crumbling Towers feature – the base game action takes place using a tumbling reels game engine. After a successful spin, the reels with winning symbols are removed and replaced by new ones. These crumbles continue as long as a new winning combination is crated.

Manage 4 crumbling re-spin wins on the bounce and you’ll open the Treasure Chest feature – here, you’ll win a multiplier prize up to 100x that will be applied to your total stake or better still, a multiplier up to 5x of the total win from the preceding crumbles.

There’s plenty of action on offer here thanks to the crumbling reel re-spins – a shame there aren’t any multipliers attached or free spins. The other extras are solid enough though and keep the action flowing at a decent pace. The fire from the dragon’s breath may be scorching but the volatility here isn’t red hot.

The variance sits right in the medium range to offer a balance of payouts and frequency of wins. Despite this, there’s a whopping 6,003 times your stake to be won on each spin! Prissy Princess is another decent outing from Play ‘N Go. The lack of free spins is a little disappointing but that aside, the quality visuals and range of other extras make this medieval adventure worth investigating. I recommend you try WMS’ Black Knight II if you like the theme or Play ‘N Go’s Grim Muerto which is their best video slot in my opinion.