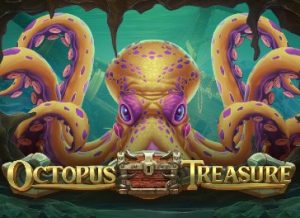 WHERE TO PLAY Octopus Treasure SLOT

A beautiful underwater habitat is the setting for the Octopus Treasure slot, an aquatic-themed game from Play ‘n GO. Played using a 5 reel, 20 payline game engine, land keys to unlock Treasure Chests which can deliver added wilds, symbol upgrades, instant wins or wild reels. Trigger the Treasure Spins feature and you’ll receive up to 10 free spins. One of the Treasure Chest extras will trigger at random on each free spin. Landing keys adds extra free spins to your tally. Find out else what else you can expect when you dive into these waters in our detailed Octopus Treasure review.

Octopus Treasure Theme – dive down to the ocean floor Play ‘n GO’s usual high design standards are clearly evident in the Octopus Treasure slot which looks terrific. With a Norse mythology theme, it centres on the legendary kraken sea monster. The visuals here are bright, bold and packed full of detail. Many similarly themed slots have a cartoonish quality. The spec here is a bit more high end. It comes together very nicely.

The seabed forms the backdrop to the action here. On the reels are playing card suit symbols alongside higher value stone pots, sacks of bronze coins, silver vases and gold crowns. Land 3, 4 or 5 of the latter on a payline for an award of 0.5, 1.5 or 3.5 x your bet. There’s also a coral reef wild that replaces all the standard symbols and pays up to 5 x your bet per line.

Play ‘n GO has created optimised versions of Octopus Treasure for computers, tablets and mobiles. You’ll find the same high-class visuals and wide range of modifiers regardless of what you’re playing on. The Octopus Treasure mobile slot works very well.

The Octopus Treasure slot has 5 reels, 3 rows and 20 paylines. Matching 3 or more symbols from left to right on a payline will result a winning outcome.

Bet levels in Octopus Treasure start at 10p per spin, rising to a maximum of £100 per spin. Use the figures below the reels to adjust. You can set autoplay if you wish. Just click on the yellow button to the right of the spin button to set. Click on the lightning bolt if you want to activate turbo mode.

Many slots in the Play ‘n GO catalogue are extremely volatile. This isn’t one of them. The Octopus Treasure volatility is in the medium range. On a scale of 1 to 10, the volatility is about a 5.

The Octopus Treasure RTP is 96.53% which is well above average. The most you can win from a single spin is 5,000 x your total bet.

There’s plenty of variety on offer in Octopus Treasure when it comes to features. Unlock the Treasure Chest extras for a range of modifiers. There’s also a Treasure Spins feature where the modifiers can come into play to really enhance your winning chances. The Octopus Treasure slot comes with a quartet of base game modifiers. Known as Treasure Chest feature, these are activated by landing 1 of the wild scatter Key symbols on reel 3 along with a Treasure Chest. Here’s what’s on offer.

Once a Treasure Chest feature has occurred, a random multiplier up to 10x is applied to your win. Known the Multiplier feature, it can be either 2x, 3x, 5x or 10x. The Key Re-Spins feature is triggered by landing the pearl scatter on reels 1, 3 and 5 on the same spin. During these 3 re-spins, the reels are made up of blanks and keys. Any key that hits is collected. The number of keys will determine how many free spins you’ll receive in the Treasure Spins feature. It can range from 5 up to 10.

After each free spin, 1 of the Treasure Chest features will become active to boost your chances. Land a wild scatter on the middle reel and you’ll get another key. This adds 1 extra free spin to your total which will also come with a feature. Finally, the Multiplier feature can apply meaning a multiplier up to 10x on each free spin.

We enjoyed this underwater adventure. The range of modifiers delivers plenty of variety and keeps things fresh. That’s certainly the case during the free spins when the modifiers can really come into their own.

It might not be volatile enough for some tastes but if you want a slot that combines the classic ocean theme with classy design and some top gameplay, the Octopus Treasure slot is one to add to the list.

Another option is the Ocean’s Treasure slot by NetEnt which is similar in terms of appearance but offers 18,000 x bet wins on each free spin.

What is the Octopus Treasure RTP?

The Octopus Treasure return to player rate is 96.53% which is above the average 96% figure. This isn’t a massively volatile slot as the variance is in the medium range ensuring your bankroll lasts a relatively long time.

What is the Octopus Treasure max win?

The maximum win is 5,000 x your total bet per spin. This can be won on any base game or free spin with the help of the Multiplier feature which can subject wins to a multiplier of 10x.

Is there an Octopus Treasure Free Spins feature?

Yes, you’ll play a quick re-spin round which will determine how many free spins you’ll begin with in the Treasure Spins feature. With up to 10 awarded initially, 1 of the Treasure Chest features becomes active after each free spin. Landing keys adds extra free spins to your total.

What are the Treasure Chest features?

Landing scatter keys and treasure chests awards 1 of 4 Treasure Chest features. These include symbol added wilds, wild reels, symbol upgrades and symbol collects which in turn award coin prizes. A multiplier up to 10x can also be applied to any winnings randomly.