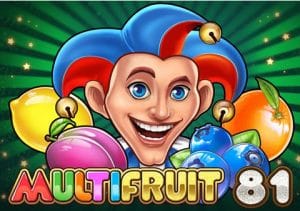 WHERE TO PLAY Multifruit 81 SLOT

Play ’N Go are renowned for their richly designed video slots but have taken inspiration from the classic fruit machine, Multifruit 81. Played using a 4 reel, 81 ways to win game engine, look out for the grinning jester who can boost payouts with multipliers of up to 5x. Play this hugely volatile game from between 2p and £100 per spin on any device.

The design in Multifruit 81 is nice and simple – the blue reels include a tasty selection of fruity inspired symbols. In rising value you’ll see bars, cherries, lemons, oranges, plums and blueberries. More lucrative are the melons which award 5 or 40 coins and the lucky red 7 which pays 7.5 or 100 coins if you land 3 or 4 in combination.

The best symbol by far is the grinning jester which is the game’s wild – he substitutes for all other symbols. Land 4 of these and you can look forward to a 500 coin reward.

The joker also offers multipliers when he forms part of a winning pathway. Find 2 jester wilds in a pathway and the payout is doubled. Find 3 and the payout rockets courtesy of a 5x multiplier boost. This is known as the Wild Multiplier feature.

Before each spin begins, 1 reel is highlighted – if the jester lands on the chosen reel, it will expand and fill the whole of that reel. This is known as the Expanding Wild feature.

There aren’t any free spins or other bonus extras on offer in Multifruit 81. Don’t mistake this retro-flavoured fruity as being boring though – the jester wilds can deliver plenty of action. This is a hugely volatile video slot, a real 10/10 affair as far as variance goes.

You can expect plenty of spells when your bankroll will disappear in a proverbial flash. Watch out then the jester works his magic though as the coins can quickly fly – it offers you wins of up to 2,520 times your stake on each spin!

Multiway 81 may not look like much on the surface but it delivers some heavyweight action. With the variance being so high, it’s not for the faint of heart though or a slot to play if you’re looking to eke out plenty of play with a limited bankroll.

If you’re looking for simple, volatile action though Multifruit 81 delivers just that. And if the grinning joker works his magic, the wilds and multipliers could leave you laughing. If you like bonus features, Play ‘N Go has plenty of options with Rich Wilde and the Book of Dead and Pimped recommended.