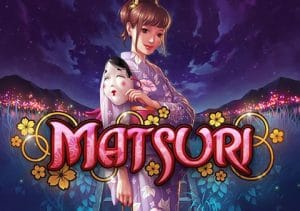 WHERE TO PLAY Matsuri SLOT

Join the partygoers at a traditional Japanese festival in Matsuri. This 5 reel, 25 payline video slot from Play ‘N Go comes with a very Japanese take on the old favourite pick me round plus a free spins feature with expanding and spreading wilds. Take this volatile game for a spin, on all devices, from between 25p and £100 a go.

Matsuri is the English translation of the Japanese word for festival. A bay at dusk, illuminated by lanterns is the setting – all of the symbols have a Japanese flavour. Look out for an assortment of snacks, fans and flowers. Joining them are 3 women in traditional, kimono-style dresses. The top payer here awards 14 times your stake if you land 5 on a single payline.

Helping you create winning combinations is the lantern which is the game’s wild – it can hit anywhere and offers payouts of 1, 4 or 25 times your stake. There are 2 bonus rounds to look forward to in Matsuri:

Free Spins feature – this round is triggered by landing 3 face mask scatter symbols on the odd-numbered reels on the same spin (i.e. reels 1, 3 and 5). You can then look forward to an initial haul of 8 free spins. Each scatter that subsequently lands adds another 2 free spins to your total – a maximum of 20 free spins can be won in all.

The wild also offers a little something extra during the feature – whenever it hits, it expands to fill the whole of the reel. The expanded wild then shifts 1 reel to the left on each free spin that follows until it disappears off the end of the reels. If you get multiple wild reels at the same time, prepare yourself for huge wins.

Kingyo Sukui Bonus feature – land 3 goldfish bonus symbols on the middle 3 reels on the same spin and you’ll trigger this Japanese version of a fairground favourite. Collect goldfish using the special paper spoon and win cash prizes in the process. Keep on picking until you’ve managed to collect all the fish or the spoon breaks.

At first glance, Matsuri looks like a gentle, almost whimsical video slot. Behind the genteel imagery lurks an extremely feisty little game engine. This is a very volatile game! High variance means lengthy spells when the festival will leave you disappointed. You can of course win big on a single spin though – to the tune of 3,000 times your total bet! Some careful bankroll management is recommended here.

If you have pockets deep enough to cope with the potential swings, then there’s plenty to like about Matsuri. The visuals have a very traditional feel and are nicely done. The features offer a nice variety and can pack a very hefty payout punch too.

We opened up Matusri expecting another bog-standard Asian-style video slot. It exceeded our expectations though. The classy visuals and big-hitting features make Matsuri a festival we’re happy to attend. If you like Japanese themed games, NetEnt’s Koi Princess is worth trying.