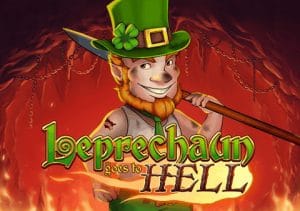 WHERE TO PLAY Leprechaun goes to Hell SLOT

Mischief making reaches a whole new level in Leprechaun goes to Hell, a devilishly entertaining new slot from Play ‘N Go. Available to play on mobile, tablet and desktop devices, this 5 reel, 25 payline game offers free spins with multipliers of up to 10x as well as an Infernal Bonus feature where big jackpot prizes are on offer. Take a trip to the underworld from between 25p and £5 per spin.

The sound and visuals on show in Leprechaun goes to Hell have a fiendish flavour – with fires bubbling away in the background, symbols on show include Celtic style playing cards, bottles of potion, horned tridents, stars and bone encrusted top hats. There are also two wilds, a wicked she-devil called, appropriately enough, Evilene and the plucky leprechaun. If both of the wilds feature in a winning combination, that payout will be doubled.

There are 2 main feature offerings. When Evilene lands on the middle 3 reels, you’ll trigger the Infernal Bonus feature and be awarded 10 free spins. These are played out on a new 3 reel, 5 payline game engine. Keep a special eye out for the heart symbol as whenever 1 of these lands, an extra free spin will be added to your total – there’s up to 50 Infernal Spins to be won.

If you land 2 Evilene symbols in the base game, you’ll be awarded a re-spin in the hope of hitting that elusive third symbol and activating the feature.

There are a quartet of progressive jackpots on offer via the Infernal Bonus feature – the more you win, the more scorching the potential payouts on offer. As the leprechaun’s meter rises, the bigger the jackpots available. The more you bet, the better the odds of landing 1of the jackpots.

Land 3 cauldron of coin scatter symbols to trigger the Free Spins feature – 10 free spins are awarded here. You’ll start the feature with a 2x multiplier that doubles all payouts. Hit 3 or more scatters and this will increase to 4x, 6x, 8x right up to a maximum of 10x – you will also get more free spins with up to 50 available.

The subject matter may be demonic but the volatility here isn’t quite as scorching as we found the variance to be in the medium range. The free spins come along at regular intervals and are a mixed bag as far as payouts are concerned.

In terms of design, Leprechaun goes to Hell is a cracker – the graphics and animations are superb with the action playing out to a manic, hard rock soundtrack with just the hint of a tin whistle.

Fusing the hell and leprechaun themes is certainly a little strange but it all works rather well – it looks and sounds terrific and there’s plenty on offer as far as features go. And if the she devil and bearded fella work their magic, there’s some red hot jackpot chances on offer too.