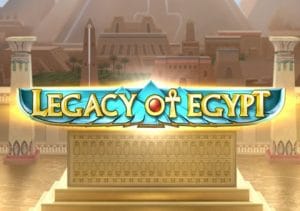 WHERE TO PLAY Legacy of Egypt SLOT

Play ’N Go is the latest developer to have a go at cracking the ancient-themed video slot in Legacy of Egypt. It’s a super volatile 5 reel, 30 payline game that comes with a bonus feature where you can win up to 20 free spins initially with multipliers of between 2x and 10x – there’s also Pyramid Spins with a fixed multiplier up to 10x. Play on your computer, tablet or mobile from between 30p and £90 per spin.

Making an Egyptian-themed game stand out from the crowd can be tricky but Play ’N Go has had a pretty good stab at it here – first impressions are excellent. An ornately designed palace chamber is the setting. On the reels you’ll see lower value A to J playing cards plus the animal gods Bastet (cat), Sobek (crocodile), Anubis (dog) and Horus (falcon).

They’re joined by the Pharaoh and his queen – land 5 of the queen and you’ll pocket an award equal to 10 times your stake. Helping to create those winning combinations is the wild (the Scarab beetle). It substitutes for everything apart from the scatter and pays over 16 times your stake if you land 5 on a payline.

If the base game play is pretty standard the action sparks into life in the Wheel of the Gods feature – it’s triggered by landing 3 or more of the scatter (the Eye of Horus pyramid) anywhere on the reels on the same spin.  You’ll win an award of 5 times your total stake as well as getting a spin of the Wheel of the Gods.

Depending on where the pointer lands, you’ll receive between 3 and 20 free spins. On each of those free spins a random multiplier is applied which can boost payouts by between 2x and 10x.

Hope to see more of the scatter during the free spins as landing 2 of them triggers the Pyramid Spins feature. Spin the wheel to determine how many of these you’ll receive. It can be anything from 3 to 8. Whatever the multiplier was on the triggering free spin will be applied to all of your Pyramid Spins – up to 10x.

Things are better still if you land 3 scatters during the free spins. You’ll spin the Pyramid Spins wheel again but this time the numbers are doubled – get lucky here and you could get another 16 free spins. Again, the multiplier from the triggering free spin is applied throughout.

If you like volatile, potentially explosive action then you’ve come to the right place in Legacy of Egypt. The variance here is sky high. You won’t find many games that offer more high risk, high reward action than this – you can win 5,000 times your total bet on each spin/free spin/Pyramid Spin with a 10x multiplier.

Combine that potentially wild gameplay with the superb design and Legacy of Egypt adds up to a very entertaining package. The volatility means it won’t be for everyone but if you do enjoy super high variance action then Legacy of Egypt delivers it in spades. If you want something less volatile and like ancient Egypt, NetEnt’s Coins of Egypt is a good game to play.