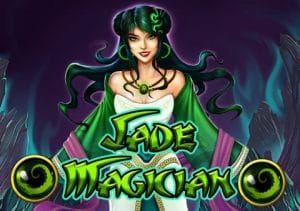 WHERE TO PLAY Jade Magician SLOT

An Asian sorceress takes centre stage in Jade Magician, a Chinese-themed video slot powered by Play ‘N Go. Played using a 5 reel, 15 payline game engine, it comes with wilds that double payouts and a free spins feature where a second wild is added to the reels. Play, on desktop, mobile and tablet devices, from between 15p and £75 per spin.

Jade Magician is a fine-looking game – the purple reels are set against a deep green backdrop and include a selection of finely drawn symbols. 4 different pieces of jade make up the lower value symbols.

It’s possible to double those payouts too thanks to the wild – as well as replacing all other symbols apart from the scatter, it provides a 2x boost to any winning payline in which it appears. That means 4 dragons plus a wild would get you a bumper haul of 5,000 times your line stake.

Jade Magician also comes with a Free Spin feature – to trigger it, you’ll need to land 3 of the scatter (the Jade Magician herself) anywhere on the reels. You’ll then be awarded 5 free spins. During the free spins, the Jade Magician acts as both a wild and scatter. Land 1, 2 or 3 of her and your tally of free spins will increase by 1, 2 or 5 respectively. There’s a total of 50 free spins available in total.

If you ‘hit the post’ in the base game and land 2 scatters, you’ll trigger the Second Chance feature – here you’ll be presented with a quartet of magical objects. Pick 1. If you land the Jade Magician you’ll trigger the free spins. 2 other objects will each reveal a cash prize. 1 hides an X – pick this and you’ll win nothing.

There’s plenty to like about Jade Magician – the design is first class, combining excellent visuals with a traditional Chinese-style backing track. The features aren’t bad either. The 2x wild multiplier can help things along nicely. The allocation of free spins isn’t the biggest but it’s certainly possible to add to the total. We’d put the variance in the medium range with wins of up to 3,000 times your bet on each spin available.

Jade Magician is an enjoyable, well-designed video slot. Get lucky with the wilds and she’s certainly capable of conjuring up plenty of excitement. It’s not my favourite Play ‘N Go title with the devilish-themed 7 Sins and the Day of the Dead inspired Grim Muerto better games.