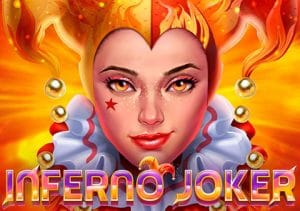 WHERE TO PLAY Inferno Joker SLOT

Play ’N Go is back with another super volatile take on the classic fruit machine in Inferno Joker. This simple video slot is played using a 5 reel, 5 payline game engine and a single but potentially explosive feature. It’s a streak re-spin round where the Inferno Joker can cook up red hot jackpots of up to 2,500 times your total bet. Play on all devices from between 5p and £100 per spin.

Like most of Play ’N Go’s fruit machine reboots, the design in Inferno Joker is simply done. You’ll see plenty of classic fruity imagery spinning around the reels including cherries, plums, lemons and watermelons. More rewarding are the gold bars and the lucky red 7 which both deliver awards of 9, 25 or 75 times your total bet if you land 3, 4 or 5 on a payline.

Unusually, the game features 2 jokers. The first is a standard joker. This pays 25, 75 or 500 times your bet if you land 3, 4 or 5 across a payline. The second is the Inferno Joker. This can land on reel 3 only. When it does it triggers the Inferno Joker Re-Spins feature. Reel 3 and any other reel that contains a joker are held and the other reels spin again.

Standard jokers that land turn into Inferno Jokers and appear as scatters. If a joker lands, it too is held and the reels spin again. The round continues until there’s a re-spin where no new joker lands or you’ve landed an Inferno Joker on all 5 reels.

Play ’N Go’s usual fruit machine recipe has been simple design, straightforward gameplay and super high variance. They’re kept to that enticing formula with Inferno Joker. The sound and visuals won’t be winning any awards but they do the job. The gameplay is rather basic but the potentially massive rewards on offer from the feature can make it well worth hitting.

As usual, the action here is super volatile. On a scale of 1 to 10 we’re talking 10. If you’ve enjoyed the other high variance fruit machines from Play ’N Go, then expect more of the same from the simple but explosive Inferno Joker. If you want more bonus features and big wins, The Sword and The Grail (by Play ‘N Go) should suffice.