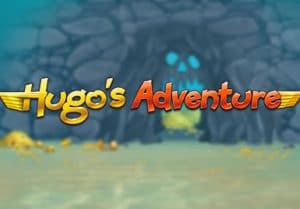 WHERE TO PLAY Hugo’s Adventure SLOT

Play ’N Go’s cheeky animated troll is back for more mischief, this time taking to the air in Hugo’s Adventure. It’s a 5 reel, 10 payline video slot that comes with cartoon-style design, a pick me round and a free spins feature with flying wilds where multiplier balloons can combine to boost payouts by up to 16x. Play this high variance game on all devices from between 10p and £100 per spin.

The design in Hugo’s Adventure is simply done. On the reels you’ll see A to 10 royal symbols embellished with lucky charms like horseshoes, dices and 4 leaf clovers. They’re joined by a monkey mechanic, a pilot and a stewardess. Hugo, in full aviator gear, is the game’s wild. Land 3, 4 or 5 of these in combination for a payout of 2.5, 7.5 or 50 times your total bet. There are 2 potentially exciting feature rounds on offer in Hugo’s Adventure.

Underwater Adventure feature – this bonus is triggered by landing the submarine symbol on reels 2 and 4 on the same spin. The submarine will then spin to offer you 1, 2 or 3 lives. Then start picking objects from the ocean floor which can reveal monetary awards. Find a danger symbol and you’ll lose a life.

Air Ace –feature – land the bi-plane scatter on reels 1, 3 and 5 on the same spin and you’ll receive 9 free spins with 1 life awarded. If an air mine symbol hits Hugo during this round, you lose a life. If a +1 balloon lands 1 extra life is added. If you have any lives left at the end of the free spins, you’ll then go on to play the Underwater Adventure feature.

Look out for special Flying Wilds in the free spins round. After hitting, they move 1 reel to the left with each free spin. At the end of any free spin, you could see a 2x balloon appear which doubles the payout. If more than 1 balloon lands, the multipliers are combined, up to a maximum of 16x. There’s also more free spins to be won with 20 in total up for grabs.

The cartoon design might give Hugo’s Adventure a light-hearted look. This is a super volatile video slot though. The features can be tricky to land but they can deliver some big action – up to 5,000 times your stake on each free spin with the 16x multipliers.

Play ’N Go have become a go-to developer for high variance action and that’s just what’s on offer here. The theme in Hugo’s Adventure might be a little strange but if you like simple, volatile games, then that’s just what you’ll find here. I would also try Raging Rex (from Play ‘N Go) which looks so much better in my opinion (and is just as volatile).