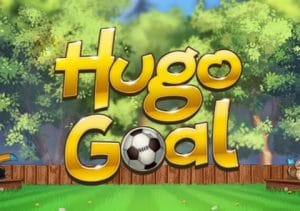 WHERE TO PLAY Hugo Goal SLOT

Play ’N Go’s animated troll once again does battle with the wicked Afskylia, this time on the football pitch, in Hugo Goal. This volatile game is played using a 3 reel, 5 payline game engine and comes with respins as well as a picks round where saving penalties can boost your win by up to 10x. Play on your desktop, tablet or mobile from between 5p and £100 per spin.

The visuals here are similar to the other video slots in the Hugo series. You’ll see cartoon flags, boots, stopwatches, whistles and footballs. The 3 higher value symbols are the Goat, Don Croco and Afskylia who awards 25 times your bet if you land 3 on a payline.

Hugo is the game’s wild and he replaces all other symbols and offers awards of 80 times your bet if you land 3 across a payline. There are 3 bonus features on offer in Hugo Goal:

Action Replay feature – land 2 of the character symbols fully stacked (or including a wild) to trigger this round. The stacked symbols are held and the other reel spins again until a winning combination is created.

Free Kick feature – landing 2 full stacks of the same lower value symbol trigger this round. Again, the stacked symbols are held. This time a single respin is awarded.

Penalty Shoot Out feature – this round is activated when you fill all 9 reel positions with the same matching symbol. You’ll then play a pick me round where Hugo is in goal in a penalty shoot-out. Pick where you want him to dive – if he makes a save, you’ll increase a multiplier. There are 5 kicks in all with multipliers of 2x, 3x, 4x, 5x and 10x on offer. The multiplier is then applied to your triggering spin win.

With its cutesy cartoon visuals, you could be forgiven for expecting Hugo Goal to be a gentle video slot. It’s definitely not. The variance here is high. It’s certainly not the most realistic football themed video slot you’ll see bit it’s well designed though and packs a potentially volatile payout punch. If you’ve enjoyed the other games in the series, then you should enjoy Hugo Goal. Alternatively, NetEnt’s Football: Champions Cup offers more in the way of features.