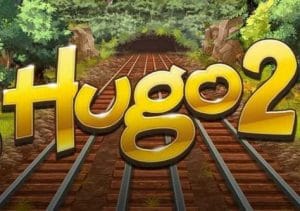 WHERE TO PLAY Hugo 2 SLOT

Play ’N Go’s favourite animated cartoon troll is back for a second adventure in Hugo 2. It’s a 5 reel, 10 payline game that comes with a picks feature as well as a free spins round where collected coins and money bags adds multipliers and wilds. Play on your desktop, tablet or mobile device from between 10p and £100 per spin.

There a distinct railway theme on display in Hugo 2 – the reels are set against a rural railroad heading towards a mysterious mine. Instead of playing cards, all of the symbols relate to the theme. They include whistles, a train driver’s hat, a carriage full of stones, a key, gold bars and pouches full of gold coins. Most rewarding is the diamond which offers payouts of up to 35 times your total stake per payline.

Helping to land those winning combinations is Hugo the troll who is the wild. As well as substituting for all other symbols bar the scatter (the raven-haired woman called Afskylia), Hugo pays 2.5, 7.5 or 50 times your stake if you land 3, 4 or 5 on a payline. There are 2 feature rounds to get stuck into in Hugo 2.

Troll Race Free Spins feature – this free spins round is triggered by landing 3 beaver symbols on the same spin. You can then look forward to 10 free spins. Watch out as Hugo races on a cart underneath the reels. Jumping from track to track he collects money bags and coins.

Hope to see the Beaver Cleaver which can hit at random here and add another 5 free spins to your tall. If you’re lucky enough to hit a Beaver Cleaver 3 times, you’ll also go through to the Skull Cavern Bonus Game feature with 3 lives.

Skull Cavern Bonus Game feature – land 3 or more of the Afskylia scatter symbol on the same spin or via the Beaver Cleaver in the free spins to trigger this multi-stage pick’em round. The goal is to try and cross a cavern by selecting pedestals. These can reveal cash prizes.

If Hugo gets knocked off a ledge or squashed a life is lost. Successfully navigate your way to other side and you get to select a key and open the treasure chest with even larger potential rewards on offer. The number of lives you get depends on how many Afskylia symbols triggered the round.

As you’d expect from a Play ’N Go video slot, the design in Hugo 2 is superb. It wouldn’t look out of place in a video game, TV cartoon or animated movie. With its top end sound and visuals and nice range of extras, Hugo’s first outing proved a hit with players. Keeping to much the same formula, there’s no reason why Hugo 2 shouldn’t do the same. If you like games based on cartoon characters, Playtech’s The Flintstones is recommended.