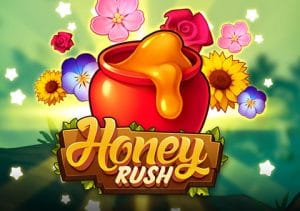 WHERE TO PLAY Honey Rush SLOT

The set up here is a little unusual. The reels are set up in hexagonally-shaped 4x5x6x7x6x5x4 configuration. Winners are created by landing a cluster of 5 or more symbols. When that happens, those successful symbols are added to the Rush Meter feature and new symbols drop in and replace them.

If you pass certain milestones in the Rush Meter on a single set of spins and symbol drops, you’ll bring some special extras into play. There are 4 potential levels to work through.

The Drone Colony copies the symbol in the middle position on the grid and creates a new winning cluster of at least 7 matching symbols. These are added to the Rush Meter and a symbol drop takes place. The sticky wild is added to the second ring of the grid. These wilds can double or treble payouts too thanks to their multiplier properties. This is known as the Colony feature.

Work your way through to Level 4 and you’ll activate the Queen Colony extra. The new cluster here is made up of between 20 and 37 symbols. A high value symbol here and you could see an explosion of coins. After a winless symbol drop, the reels go back to their original state and the Rush Meter empties.

The Drone and Queen Colony features can also trigger randomly following any losing spin. There’s also a Worker Colony extra where the winning cluster is between 7 and 15 symbols plus the sticky wild extras.

Honey Rush is an interesting departure for Play ’N Go. The simple design is nicely done but it’s the unusual gameplay that makes the game stand out. It can take a little while to get accustomed to the set up and features so a few free play spins are recommended.

If the gameplay is rather unorthodox one thing, we can rely on with Play ’N Go video slots is sky high volatility and Honey Rush doesn’t disappoint on that score. The variance here is extremely high with maximum wins of 9,000 times your bet on each spin.

If you’re looking for a game that combines unusual gameplay and volatile gameplay, then you’ll find both in the eccentric but playable Honey Rush. If you want something more orthodox, Play ‘N Go’s Crystal Sun would be my choice – it’s like NetEnt’s Starburst but with multipliers and much bigger potential payouts.