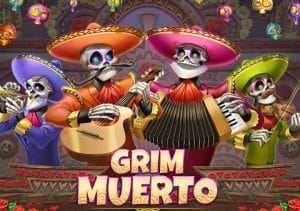 WHERE TO PLAY Grim Muerto SLOT

It may not have the most appealing of names but Grim Muerto is in fact a beautifully designed and very entertaining Mexican-themed video slot from Play ‘N Go. Based on the Day of the Dead festival, this 5 reel, 20 payline fiesta comes with expanding wild reels, a free spins feature with added wilds and a second chance extra if you just miss out on triggering the feature. Play from between 20p and £100 per spin.

First impressions of Grim Muerto are very favourable – it looks and sounds terrific. Set against an ornate, patterned backdrop, decorated by skulls, the reels include stylised playing cards alongside the 4 skeleton members of a mariachi band – Amador the accordionist, Tauro the trumpeter, Fernando the fiddler and Vincente on the vihuela. Vincente, in the orange garb, is the most lucrative member of the band, awarding 700 coins if you land 5 in a row.

The guitar is the game’s wild – it substitutes for everything bar the bonus. 5 wilds will get you a 1,000 coin payout. For all the members of the band and the wild, only 2 symbols are needed to create a winning combo.

The first extra to note is the Expanding Wild feature – on each spin, 1 reel will be highlighted. If the wild lands on the highlighted reel, it will expand to fill the whole reel. Things get even better in the free spins as between 2 and 5 reels are highlighted, offering some fine potential.

To trigger the Free Spins feature, you’ll need to land 3 book scatter symbols. You’ll receive a payout of 10 times your total stake as well as 10 free spins. As well as the highlighted reels, look out here for the candle symbol – land 3 of these and you’ll re-trigger even more free spins. If you get 1 or 2 candles, you will get 3 or 6 extra free spins (respectively). Furthermore, 1 of the mariachi band will also become an extra wild for the duration of the feature.

If you land two book scatters during the base game, you’ll trigger the Second Chance feature – the 4 band members will appear. One will be highlighted to reveal grant you access to the Free Spins feature, a coin prize or an X which means no win.

The theme may be deadly but this video slot shouldn’t end up ravaging your bankroll too badly. On the variance scale, it’s in middle. Grim Muerto may have an ugly sounding name but this game is anything but. The visuals are superb, backed by a catchy, brassy, mariachi score. The range of features is good too. The subject matter may be a bit creepy for some but Grim Muerto is certainly an entertaining and very playable Play ‘N Go title.