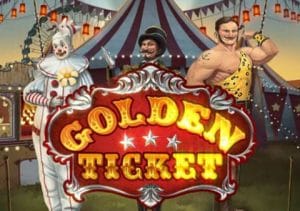 WHERE TO PLAY Golden Ticket SLOT

Enjoy a night out at the big top in Golden Ticket, a beautifully designed circus-themed slot from Play ‘N Go. This is a circus like no other though, coming with collapsing reels, progressive multipliers and a bonus feature set in a shooting range that offers 10 free shots. Stakes range from between 20p and £40 per spin.

First impressions of Golden Ticket are very favourable – it looks and sounds an absolute delight. Set against a field full of circus tents and caravans and overlooked by a dapper ring master, the reels are a 5×5 set up. Look out for strongmen, clowns, top hats, dumb bells and juggling clubs. The action is accompanied by a barrel organ heavy soundtrack and cries and yells from the crowd. Very well done it all is too.

Rather than spinning, symbols collapse onto the reels – payouts are awarded when you land 3 or more of the same symbol in a horizontal or vertical configuration. Those symbols will magically disappear to be replaced by the symbol directly above. The collapses keep on coming until you land a combination where there’s no winner on show. Every time you get a collapse win, a multiplier will increase. Keep track of this via the meter to the left of the reels.

As each collapse starts, you’ll notice the word BONUS spelled out behind the reels – if you manage to collapse all of the relevant symbols and reveal BONUS, then you’ll trigger the Bonus feature.

The setting for the feature is a classic fairground shooting gallery – here you’ll be given 10 shots (in effect spins) to try and hit a selection of targets that include balloons, drums, ducks, targets, cakes, stars, elephants, lions and clowns. Prizes are awarded if you land 5 of the same symbol. The one you want to see is the clown which is the top payer, awarding up to 35x. Another 10 shots are on offer if you find 5 of the Bonus symbol.

Triggering the Bonus feature is of course a good thing. The real aim in the base game is to try and clear the reels of symbols entirely – manage that and you can look forward to a bonus of some 200 times your stake.

There’s no shortage of action on offer in Golden Ticket thanks to the collapsing reels – expect a steady flow of smaller wins. The Bonus feature isn’t the easiest to trigger but it can provide some solid if not earth shattering wins. The overall variance is in the medium range.

Golden Ticket is among the best looking slots around – the features aren’t quite as spectacular but the collapsing reels and shooting gallery offer plenty of entertainment. We wouldn’t necessarily run away to join this circus but we’d be more than happy to buy a ticket and enjoy the show. If you like Play ‘N Go titles, Eye of the Kraken is superb.