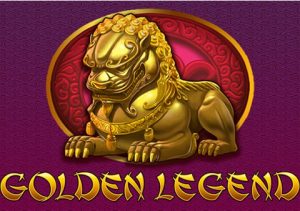 WHERE TO PLAY Golden Legend SLOT

Highly explosive, Chinese themed action is the order of the day in Golden Legend. It’s a 5 reel, 4 row 50 payline video slot from Play ‘N Go that comes with a bonus feature that awards up to 20 free spins complete with wild stacked symbols on reels 2, 3, 4 and 5. Stakes range from between 50p and £100 per spin.

2 of the online slot world’s favourite themes – gold and historic China – collide in Golden Legend. Flanked by Chinese pennants and overlooked by a pair of dragons, the purple reels include A to 9 playing cards as well as fish and birds, tortoise and lion and a roaring tiger. All are drawn in ornate gold to give the reels an opulent feel. The golden coin is the wild, replacing all other symbols (with the exception of the scatter).

The red dragon is the scatter – land 3 or more of these anywhere on the reels and you’ll pocket a payout worth 4 times your total stake. You’ll also trigger the game’s Free Spin feature which is a very impressive one at that.

Once active, you’ll be given 10 free spins. That may not sound much but there’s a tidy little extra on offer courtesy of some added wilds. On each free spin, 2 extra wild symbols appear stacked on reels 2, 3, 4 and 5. You can re-trigger another set of 10 free spins if you land the three scatters again during the feature giving you 20.

With its bold graphics and gentle soundtrack, you’d be forgiven for thinking that Golden Legend was a genteel game. In fact, it’s anything but – this is a hugely volatile game. Expect plenty of lean spells when the dragon will devour your bankroll in the blink of an eye.

If you manage to land the added wilds in concert during the feature, then some massive payouts are possible. This is a high risk, high reward video slot so careful bankroll management is recommended. Fans of Chinese themed slots should find much to like here.

It’s not for the faint of heart though – if you have deep pockets and plenty of patience though, the volatile Golden Legend can deliver some mighty action. If you like high variance games, Play ‘N Go’s Rich Wilde and the Book of Dead is well worth a go.