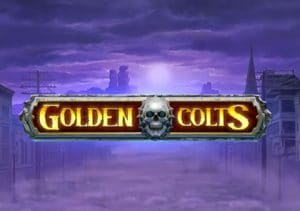 WHERE TO PLAY Golden Colts SLOT

Join the gamblers and sharp shooters in the Ace High Gang in Golden Colts, a wild west-themed video slot from Play ’N Go. Available on all devices, it’s a 5 reel, 40 payline title that’s packed full of extras including free spins, re-spins, giant symbols, wild reels, multipliers of up to 30x and pick me prizes. Play from between 20p and £100 per spin.

The design here is done comic book style. A dusty town main street forms the backdrop to the reels. Joining the A to 9 playing cards are the 4 members of the gang. There’s a man, woman, the gambler and the sheriff. Land 5 of the latter and you’ll pocket 12.5 times your bet. That number is doubled if you land 5 of the wild on a line – it also substitutes for everything apart from the scatter.

Land 3 of the scatter on the same spin and you’ll trigger the Golden Colts Bonus Game – you’ll then be randomly allocated 1 of the following 7 features:

Ace-High Gang feature – land this and you’ll get 3 free spins, complete with a 4×4 mega symbol that can appears on reels 2 through to 5.

Wild Bull feature – 3 free spins are awarded here too. On each free spin, 1 or possibly 2 reels will be totally wild.

Law of the Wild feature – a single free spin is awarded here. Look out for the sheriff who spins in stacked formation on the middle 3 reels. Fill a whole reel with sheriff symbols and you’ll be awarded a re-spin with the stacked sheriff locked in position.

Gunslingers feature – again 1 free spin award. Any wins on this spin benefit from a multiplier that sees the payout boosted by between 5x and 30x.

Poker Play feature – a 2×2 Gambler symbol is wild on this single spin. Land another wild gambler and a re-spin is awarded with the wild freezing in position.

Furies feature – 2×2 Girl symbols are in play here. The reels keep on spinning until you land a winner.

Most Wanted feature – this is a variation on the pick me round. Choose from the 20 Wanted posters to win instant cash prizes or trigger the Ace-High Gang or Wild Bull features.

A bonus feature that awards a maximum of 3 free spins doesn’t sound particularly exciting. The modifiers that come with the free spins offer plenty of potential though – especially the maximum 30x multiplier from the Gunslingers feature or the 2 wild reels from the Wild Bull feature.

You can expect to land the features regularly enough too. This isn’t the most volatile video slot you’ll come across with the variance is in the medium range. Play ’N Go have delivered a fresh take on a favourite theme here. The comic book design is as classy as you’d expect and the features provide plenty of variety.

If that sounds like an enticing combination, you’ll want to take aim at Golden Colts. I also suggest you try some of Play ‘N Go’s other titles with Planet Fortune a good choice.