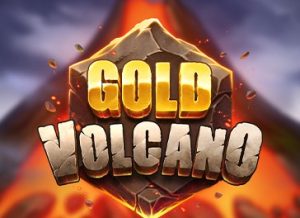 WHERE TO PLAY Gold Volcano SLOT

Unleashing a torrent of coins is the aim in the Gold Volcano slot, an unusual 8 reel, cluster pays title from Play ‘n GO. The Gold Volcano can explode into life and deliver plenty of action courtesy of the wide variety of extras it offers. These include cascading reels, multiplier wilds that can double payouts, added wilds, symbol shuffles and extra layers of symbols.  In our Gold Volcano review, you’ll find out about the Crystallisation feature where collecting scatter transforms symbols into the most lucrative gold symbol. There’s also the Eruption feature which awards free spins on an expanded reel grid. Let’s take a closer look at what the explosive Gold Volcano has to offer.

The base game action in the Gold Volcano slot takes place on an 8 reel machine. These reels are set up in a 3-4-5-6-6-5-4-3 layout. To create a winning combination, you need to land a cluster of 4 or more matching symbols horizontally and/or vertically.

You can play Gold Volcano at stake levels that range from between 20p and £100 per spin. Autospins are available here, as is turbo mode if required. Just click on the lightning bolt of you want to quicken up the pace.

The theme here is pretty fiery. This isn’t quite as volatile as you might expect from a slot from Play ‘n GO which usually ramps up the variance. The Gold Volcano volatility is still quite high but we’re talking 6 rather 10 out of 10.

There’s plenty going on in Gold Volcano. It comes with randomly triggered modifiers as well as a couple of triggered extras including free spins.

When you do form a winning combination, a cascade follows. The successful symbols are removed. Instead of dropping down, the symbols in Gold Volcano shift up the grid. The cascades continue until there’s one where no new winning combination is formed.

This can strike at random after you’ve landed a winning cascade. A wild or multiplier wild can appear in a position where one of the previous winning symbols appeared.

The Dormant feature can land following a winless spin or cascade. It then activates 1 of the following extras:

Each time a scatter lands, it’s collected in a meter. When you have filled the meter, 1 symbol is transformed into the most lucrative gold symbol. In standard play, the feature resets at the end of each round.

This bonus is triggered if you land 6 successive cascade wins in a row. You reward is an initial 5 free spins on an expanded 8×8 grid. You can retrigger more free spins here too if you get on a winning roll of cascades. The Crystallization feature can also be triggered in the free spins. The symbols don’t reset following each free spin either. There’s a slightly primitive feel to the design in the Gold Volcano slot game. That’s perfectly fine given the prehistoric subject matter. In the background you’ll see a mountain range and one dominant volcano. The way the reels are set up means that they appear in the shape of a volcano. The design is of the no-frills variety but it does the job perfectly well.

The symbols are very simple. You’ll see playing card suits alongside a quartet of higher paying gemstone symbols. The best of these pays 1,000 x your bet if you manage to land a cluster of 30 or more of them.

The game comes with 2 wild symbols. As well as a standard wild, there’s also a 2x multiplier wile which doubles the payout when it makes up part of a winning combo.

The simple visuals you’ll see in the desktop version in on display in the Gold Volcano mobile slot too. It’s rather basic but works perfectly well. The game is full of moving parts but we’re in safe hands with Play ‘n GO which knows what it’s doing with this sort of slot. The mobile version works perfectly well.

The Gold Volcano slot won’t be winning any awards for its visuals which are functional rather than beautiful. The innovative gameplay makes this a slot to consider though. There’s a decent amount of variety on offer from the range of features and they can pack a solid punch given the relatively high volatility.

If you fancy trying something a bit different, Gold Volcano offers just that. Fancy something a little simpler? Play ‘n GO’s Rich Wilde and the Book of Dead is their most popular title. If you like the Cluster Pays mechanic, Star Clusters Megaclusters by Big Time Gaming is the best one available.

What is the Gold Volcano slot RTP?

The Gold Volcano return to player rate is a solid 96.2%. That’s about average. Over the long term, for every £1 wagered, just over 96p is returned in prizes. It is 6/10 in terms of variance meaning your balance should last quite long.

Is there a Gold Volcano free spins round?

Yes, get on a run of 6 or more cascade win in a row and you’ll trigger the Eruption feature. On offer here are 5 free spins on an expanded 8×8 reel grid which enhances your chances of landing a winning cluster.

What is the Gold Volcano max win?

The Gold Volcano slot offers payouts of up to 10,000 x your total bet which is high for a Play ‘n GO title. Your best bet is get big clusters in the free spins where 2x wilds can also apply.

What are Cluster Pays?

In Gold Volcano, winning combinations are created by landing cluster of matching symbols. Land 4 or more symbols horizontally and/or vertically for a winner. A cascade then follows with those symbols being removed and new ones replacing them. The bigger the cluster, the higher the potential rewards.