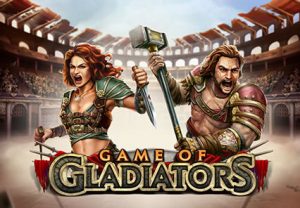 WHERE TO PLAY Game of Gladiators SLOT

Join the toughest warriors of the Roman empire in Game of Gladiators. Created by Play ’N Go, it’s a 5 reel, 20 payline video slot that comes with 5 special base game modifiers that can strike at random on any spin to award extra wilds, wild reels, respins and symbol upgrades. There’s also a free spins battle where extra rewards are on offer if your chosen gladiator emerges victorious. Play this high variance game on your PC, tablet or mobile from between 20p and £100 per spin.

The Roman amphitheatre forms the backdrop to the action here. Joining the A to J royal symbols are 4 potentially more rewarding gladiators. The champ of the quartet is called Scissor who pays 2, 4 or 20 times your bet if you land 3, 4 or 5 across a payline.

The tiger is the game’s wild. This offers payouts of up to 25 times your bet per payline as well as replacing everything apart from the portcullis scatter. On any spin, the Primus extras can come into play:

Then there’s the Enter the Arena Battle feature which is played when you land the scatter on reels 1, 3 and 5 on the same spin. First choose either Amazonia or Spartacus – your choice will then replace the standard scatter for the duration of the free spins.

The free spins then play out while your chosen gladiator does battle with the standard gladiators. How the battle is decided is quite complicated. All you really need to know is that a new expanded paytable is used and 2x and 3x multipliers can boost your winning chances.

If you chose Spartacus as your scatter and he wins, the battle you’ll get a retrigger. If you chose Amazonia and she’s comes out on top, you’ll get a bonus of between 20 and 100 times your bet on top of your standard free spin wins.

This is quite an unusual video slot. There’s plenty going on in the base game and especially the free spins battle round. If the features are a little unorthodox for a Play ’N Go video slot, Game of Gladiators comes with the developer’s usual high-class design and high variance – there are wins of 5,000 times your bet.

We enjoyed this trip back to ancient Rome. If you like the classical theme but want some out of the ordinary extras, then Game of Gladiators is a good place to start. If not, Quickspin’s Tiger’s Glory should do the trick.