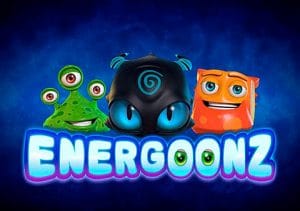 WHERE TO PLAY Energoonz SLOT

Join a gang of cheeky extra-terrestrials crackling with energy in Energoonz, an unusual sci-fi video slot from Play ‘N Go. The action takes place on a 5×5 cascading reels set and comes with expanding multipliers and a free spins round. Play on all devices from between 20p and £40 per spin.

As usual with a Play ‘N Go game, there’s little reason to gripe about the design of Energoonz. With a space backdrop, the reels include thunderbolts, flames and electrons alongside 3 higher value aliens. The best of these is the blue-eyed alien who offers awards of up to 25 times your total stake per payline.

It’s worth noting here that winning combinations are created by landing 3 or more matching symbols in a vertical or horizontal formation. More lucrative still is the plasma ball wild – this bundle of energy replaces all other symbols and offers payouts of 5, 15 or 500 times your total stake if you land 3, 4 or 5 in combination.

If you land a winner, the electro machine will burst into life and blast those symbols from the reels. No new symbols are added but any symbols already on the reels will drop into the vacated spaces. If this new combination results in a winner, the process is repeated. Each successive symbol drop win also increases a multiplier which can boost payouts by up to 10x. The goal is to clear the whole screen of symbols. Manage that and a special bonus of 1,000 times your bet is awarded.

You’ll notice that the word BONUS can lurk behind the reels at random- if you clear a whole reel and reveal the whole of the word BONUS, you’ll trigger the Bonus feature. 10 free spins are awarded – these play out on a new set of reels and feature 10 new alien symbols. Landing between 5 and 10 of the same alien delivers payouts of between 1.25 and 75 times your stake. Also in play in the feature is the energy ball symbol. Land 5 of these and you’ll get another round of free spins.

There are plenty of moving parts to this video slot. Despite that slightly frantic feel, the design works well and the imagery is neat and crisp. If you’re after explosive, volatile action then Energoonz might leave you a little disappointed as the variance here is quite low. You can expect a steady stream of action though and the multiplier can work some magic if you get on a roll with the symbol drop wins.

Part social game, part video slot, Energoonz is a well-designed, sci-fi adventure and certainly worth a spin if you fancy something a little out of this world. I would recommend you try its sequel, Reactoonz, which is highly volatile.