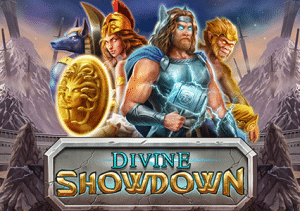 WHERE TO PLAY Divine Showdown SLOT

Gods from Norse, Egyptian, ancient Greek and Chinese civilisations go head-to-head in the Divine Showdown slot. Created by Play ’N Go, it’s a volatile 5 reel, 20 payline video slot that comes with multipliers of up to 10x, respins and free spins where each god delivers a powerful modifier extra. Join this myth and legend battle on all devices from between 20p and £100 per spin.

There’s a regal theme to Divine Showdown and that’s evident from the high-class design. Joining the golden A to 10 symbols are Thor, the Norse god of thunder; Wukong, the Chinese monkey king; Athena, the Greek goddess of wisdom and war, and Anubis, the Egyptian god of death. The top standard symbol is Thor who’ll get you 16 times your bet if you land 5 across a payline. The sword wild replaces everything bar the scatter and offers awards of up to 20 times your bet per line.

Multipliers of up to 10x

Boosting your winning opportunities in the base game is the Multiplier Reel feature – multiplier wilds can strike at random and send your payouts rocketing from anywhere between 2x and 10x.

You could also receive a special Power Spin at random – known as the Power Spin feature. You then get a free respin with 1 of the powers associated with an ancient deity will be in play:

To trigger the main feature round, the Free Spins feature, you’ll need to land 3 scatter symbols on the same spin. First pick 1 of the 4 gods who will battle on your behalf throughout the round. Then spin the battle wheel. You could go straight through to a free spin here.

Alternatively, you could end up in a battle with another god. If your chosen god wins, a free spin follows, complete with the special modifier. Lose the battle and you lose a life. You’ll start with 3 lives. The round is over when all of them are gone.

Play ’N Go are our go-to developer when it comes to volatile action and Divine Showdown is another crackerjack on that score. This is an extremely fiery slot and the variance is very high. A screen full of Thor symbols will result in a 400 times bet win – add in the 10x multiplier and that becomes 4,000 times your bet on each spin or free spin.

Play ‘N Go haven’t shirked on the design or gameplay either. The visuals are high class and the modifiers and multipliers offer plenty of variety. Put that together with the innovative theme and you have a very playable slot, especially if you enjoy high risk, high reward action. Other high variance slots from Play ‘N Go include Honey Rush and Wild Rails.