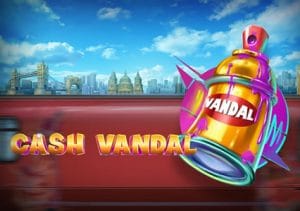 WHERE TO PLAY Cash Vandal SLOT

Go on a tagging spree across 3 of Europe’s biggest cities in Cash Vandal, a 4 reel, 10 payline video slot from Play ’N Go. The spray scan scatters in this graffiti-themed title can trigger plenty of extras including re-spins, added wilds, transforming symbols and mega reels with 2×2 symbols. There’s also a free spins round with a stacked wild plus 1 of the modifier extras. Play this high variance game on all devices from between 10p and £100 per spin.

You’ll be offered the chance of playing in London, Paris or Berlin. The city you’re in can have a bearing on what features are on offer. You’ll see a vista of your chosen city in the background as well as a tube carriage that’s been sprayed with graffiti. On the reels are 5 lower value fruit symbols as well as a wad of banknotes, a gold bar and a diamond.

The wild is the most rewarding symbol, offering a payout of 50 times your bet if you manage to land 4 on 1 of the game’s 10 paylines. There are also 2 scatters – the standard spray can and the golden spray can which can hit on reel 4 only. These can combine to trigger Cash Vandal’s bonus features.

Re-Spin feature – this is awarded when you land a golden spray can on reel 4. It is held and the other reels spin again to offer another chance to trigger 1 of the 2 feature rounds.

City feature – 1 standard spray can scatter plus the golden spray can on reel 4 trigger this round. On offer is a free spin with 1 of 3 potential modifiers. Which one you get depends on which city you’re in:

Free Spins feature – 5 or 10 free spins are awarded if you land 2 or 3 standard spray cans plus the golden spray can on reel. Before they begin, choose your city. The modifier associated with you chosen city will be active on each free spin in this round. Also boosting your winning chances is the stacked wild on reel 4 which is present throughout.

Like many video slots in the Play ’N Go catalogue, Cash Vandal is a very volatile game. This Euro trip can feel like an expensive one for long spells. The upside is that it’s possible to land a big haul of coins on the same spin, especially if you trigger the feature round with the stacked wild and modifier – up to 5,000 times your bet on each spin/free spin.

The theme won’t be for everyone but if you’re after a high variance game that offers something a little different, then that’s just what you’ll find in Cash Vandal. On a similar note, Play ‘N Go’s Pimped is recommended.