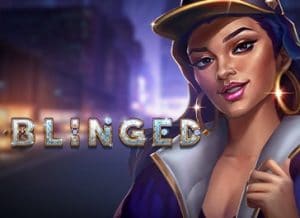 WHERE TO PLAY Blinged SLOT

A girl group and a female rapper are among the stars of the Blinged slot, a super flashy, luxury-themed game from developer Play ‘n GO. Dripping in gold and jewels, this 5 reel, 10 payline video slot comes with Re-Spin and Win Spins features. Once triggered, you’ll receive 1 or 5 Win Spins. These free spins keep on coming until you land a winning combination, with a multiplier rising by 1x each time you land a winless spin. Landing scatters adds extra Win Spins to your tally, up to a maximum of 20. Is this slot style over substance? Find out in our detailed Blinged review. A slot called Blinged was never likely to be an example of understated refinement. This is just as flashy and in your face as you might expect. There’s a comic book feel to the visuals here which are nicely done. The design is just what we expected from a slot called Blinged.

Set against a backdrop of big city skyscrapers, the reels are edged in gold. The lower value royal values are gemstones edged in gold. They’re joined by stacks of cash, gold trainers, a jewel encrusted gold ring and a girl group. The female rapper is the top standard symbol. Land 3, 4 or 5 of these in combination and you’ll pocket an award equal to 2, 15 or 75 x your bet.

The rapper in the hat is the wild. She substitutes for all the standard symbols and also offers payouts of 5, 20 or 100 x your total bet. She looks a little like Rihanna though.

As usual for a Play’n Go release, there’s a Blinged mobile slot. The simple gameplay and flashy visuals are a good combination and work rather well on the smaller screen. Blinged is a perfectly playable on mobile, tablet and desktop.

The theme in the Blinged slot might be very flashy and showy but the gameplay is actually very straightforward. The action takes place on a classic 5 reel, 3 row, 10 payline machine. To create a winning combination, you’ll need to land 3 or more matching symbols or wilds in a payline on adjacent reels, starting from the leftmost reel.

You’ll find a variety of stake levels available in Blinged which makes it suitable for microstakes players, right up to high rollers with deep pockets. Bet sizes start at 10p per spin, rising to a maximum of £100 per spin. Play ‘n GO’s usual autoplay options are available here which gives you plenty of control in terms of numbers and stop limits. Click on the lightning bolt if you want to activate turbo mode.

The Blinged RTP is 96.25% which is typical of a release from Play ‘n GO. It’s slightly above average for a return to play rate but not massively so. Many slots from the developer are super volatile. Given the high rolling theme you might expect that to be the case here. In fact, the Blinged volatility is in the medium range. The maximum payout is 5,000 x your bet per spin.

The Blinged slot isn’t overloaded with extras. In fact, the gameplay here is relatively straightforward. The main attraction is the Win Spins feature where expanding multipliers can really get things moving. There’s also a Re-Spin feature. Both features are activated from the diamond scatter.

The shimmering white diamond is the scatter symbol. This can appear on reels 1, 3 and 5 only. Land 2 of them on the same spin to trigger the Re-Spin feature with 1 free spin. If no win is created, you will get a free re-spin with the multiplier increasing by 1. The re-spins keep on coming until you get a win. The multiplier also increases with each re-spin. When the diamond scatter appears on reels 1, 3 and 5 on the same spin, you will trigger the Win Spins feature with 5 win spins or free spins.

On each Win Spin, you’ll either create a winning combination or if there’s no winner on display, you’ll receive a re-spin. If you get a re-spin, a multiplier increases by 1x. The multiplier keeps on rising with each winless re-spin until you finally land a winner. That winning combination payout is then boosted by the accumulated multiplier which is then carried over to the next Win Spin.

The Blinged slot is a game that’s full of swagger and attitude. The design is brash and flashy and, appropriately enough, full of bling. It’s a bit of a surprise to find the gameplay quite so simple and not especially volatile.

The Win Spins feature can be well worth landing though, especially if you manage to get the multiplier motoring following a number of winless re-spins.

It might be a bit too glitzy for some tastes but if you like the hip hop theme and simple gameplay, that’s just what you’ll find in Blinged. Finally, it’s a sequel to the Pimped slot, also by Play ‘n GO.

What is the Blinged RTP?

The Blinged return to player rate is 96.25%. That’s slightly better than average and is around the usual RTP figure you can expect from a Play ‘n GO powered slot. It’s also medium variance meaning you can get an array of wins in the base game and bonus features.

What is the Blinged maximum payout?

The most you can win from the Blinged slot is 5,000 x your total bet per spin. This is achieved from the Win Spins feature as the multiplier increase with each winless re-spin or Win Spin.

What are Win Spins?

Can you play Blinged on a tablet or mobile?