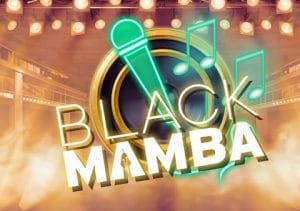 WHERE TO PLAY Black Mamba SLOT

Black Mamba is a high variance, rock-themed video slot from Scandi developer Play ’N Go. Highlights of this show include cascading reels with multipliers, 4 modifier extras and a free spins feature with modifiers. Join the audience from between 20p and £100 per spin.

The action in Black Mamba takes place on a 5×5 grid with winning combinations created by landing 3 or more matching symbols in a row, either vertically or horizontally. On the reels you’ll see microphones, headphones, a plectrum, drumsticks and cymbals and 3 members of the band – Alexandra, Cecilia and Fred. This trio all award 0.3, 1 or 5 times your bet if you land 3, 4 or 5 on a payline.

The Black Mamba logo is the wild. This pays 1, 3 and 25 times your bet. Lead singer Martina is a second multiplier wild that appears in the bonus round. She doubles payouts and also pays 2, 6 or 50 times your bet.

Each time a successful combination lands, the winning symbols are removed and new ones drop in and replace them. A wild appears in the middle position of the newly dropped symbols. Each successive drop also increases a multiplier by 1x.

On any winless base game spin, you could see a special modifier go live. Which one you get depends on which band member is active:

Each win made up of Alexandra, Cecilia or Fred fill up a charge meter. Fill 4 positions on the meter to Charge Concert Mode or 6 to Overcharge it in the Concert feature. Each band member then performs their solo and delivers their special modifier. If you managed to Overcharge the Meter on the triggering spin, any multipliers in play there are carried over.

The main feature, the Free Spins feature, is triggered by clearing the whole grid of symbols. Free spins are then awarded. The active band member’s modifier will trigger on a losing free spin. Active on each free spin is Monica who awards a 2x multiplier when she forms part of a winning combination.

Each cascade win also increases a multiplier by 1x. There’s no limit to how high this can go. Charge the Meter to trigger even more free spins. Clear the grid and you’ll be in line for an instant bonus of 50 times your bet.

Play ‘N Go has become our go to developer for supremely volatile video slots and Black Mamba is just that. This is another extremely high variance release with top wins of 5,000 times your bet on each spin or free spin. The gameplay here is slightly unusual for a Play ’N Go game though.

The modifiers certainly help move things along and the free spins can be well worth hitting. As usual for a video slot from this developer, Black Mamba is a high risk but potentially high reward slot. The theme won’t be to all tastes but if you like volatile action then this show from Black Mamba shouldn’t disappoint. If you want more rocking action Demon by Play ‘N Go is also worth looking into.