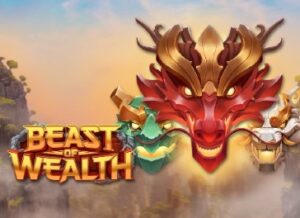 WHERE TO PLAY Beast of Wealth SLOT

A dragon, tortoise, phoenix or tiger could help you land a big score in the Beast of Wealth slot, a fortune-themed jackpot game from Play ‘n GO that comes with a strong Chinese flavour. This Asian adventure features classy design and comes with simple but potentially volatile gameplay. Trigger the Free Spins feature and you’ll receive 8 free spins. Choose 1 of the 4 beasts which will be the only high value symbol in play during the feature. The game also offers the chance to land 4 progressive jackpots. Discover more in our in-depth Beast of Wealth review.

The Beast of Wealth slot has a strong Chinese fortune theme. It takes its inspiration from 4 mythological guardians (the Phoenix, Tortoise, Tiger and Dragon). The action takes place within a very traditional red, temple-style building. The theme here might be an ancient one but the visuals in Beast of Wealth are bang up to date and very easy on the eye.

There’s a fresh, modern look to the symbols (the 4 guardians) which are joined by Asian-style A to 9 playing card values. The dragon symbol pays the most with 5 in combination dishing out 10 x bet payouts. The gong is the game’s wild. This substitutes for all the standard symbols when it makes up part of a winning combination.

Classy visuals and straightforward gameplay are just what you need when it comes to play on devices with smaller screens and that’s just what you’ll find here. The Beast of Wealth mobile slot looks terrific. It’s perfectly playable on a mobile or tablet.

Like with the other wealth slots, Beast of Wealth has 5 reels and 243 ways to win. Landing matching symbols on 3 or more consecutive reels starting from reel 1 will result in a winner.

As usual for a slot from this developer, Beast of Wealth is available to players of pretty much all bankrolls. You can try your luck at stakes of between 10p and £100 per spin. Autoplay and turbo spin modes are available if required. You can run up to 100 autospins complete with win, loss and stop on feature limits.

The Beast of Wealth RTP is 96.17%. Most slots from Play ‘n GO hover around the 96.2% mark so this is in the right ballpark. The variance here is quite high without being enormous. On a scale of 1 to 10, we’d put the Beast of Wealth volatility at 8. The maximum win, excluding jackpots, is 5,000 x your bet.

There’s nothing very original or complicated about the features on offer in the Beast of Wealth slot. Top of the bill as far as features are concerned in the free spin feature where you get to choose a Beast which dominates the reels. There’s also the not so small matter of the progressive jackpot round to consider. 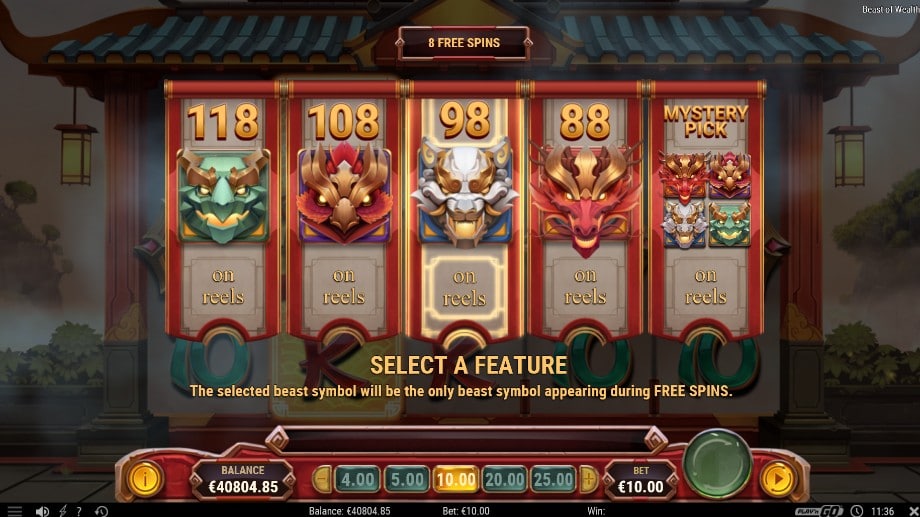 To activate the game’s Free Spins feature, you’ll need to land 3, 4 or 5 of the yin and yang scatter symbols on the same spin. You’ll receive a cash award equal to 5, 10 or 50 x your total bet before going on to play the free spin feature.

Before the round starts, pick 1 of the 4 Beasts of the title. The Beast you choose will appear in stacks during the free spins and will be the only Beast on display. The other symbols are the lower value royals:

The number of symbols varies depending on their value. The Tortoise is the least rewarding of the 4 Beasts but the extra numbers can make up. Opt for the Dragon and you’ll see fewer symbols. These symbols are potentially more lucrative though.

Alternatively, go for the Mystery Pick. This offers a random Beast and a random number of symbols placed on the reels. If fortune is smiling here, you could end up with 118 Dragons spinning around the reels during the free spins. 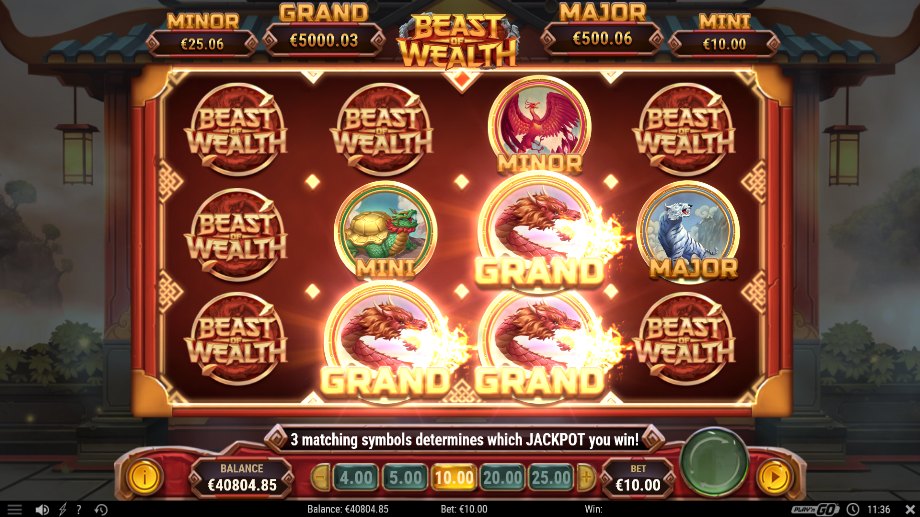 On any spin, you could see between 1 and 5 of the reels turn into a Gold Reel. If you’re lucky enough to land a wild in a gold reel, you’ll activate the Jackpot feature where you’ll have the chance to land 1 of 4 progressive prizes.

In the Jackpot feature, you’ll choose from 12 gold coins. Uncover 3 of the same value and you’ll win the associated jackpot prize:

The Beast of Wealth slot won’t be winning any awards for originality. We’ve seen the simple combination of free spins and dominant symbols in plenty of other slots.

The gameplay might be rather limited but Play ‘n GO knows how to put together a solid package. The visuals are very impressive and the volatility is high enough to keep things interesting. Add the progressive jackpots into the mix and you have a simple but still playable take on the classic Chinese theme.

You should play the Celebration of Wealth slot which shares the 4 progressive jackpots but offers you the chance to play with up to 7,776 ways to win in the Free Spins feature.

What is the Beast of Wealth RTP?

The Beast of Wealth RTP is 96.17%. Average for a slot game, 1.5% of the RTP goes towards the 4 progressive jackpots making it decent for a jackpot game.

What is the Beast of Wealth max win?

The max win is 5,000 x your total bet, excluding the progressive jackpots. Medium to high variance, Play ‘n GO rate the volatility at 8 out of 10. Winning combinations are fairly frequent too.

Is Beast of Wealth a progressive jackpot slot?

Yes, you’ll have the chance of winning 4 progressive jackpot prizes in Beast of Wealth. Land a wild symbol on a gold reel to activate the Jackpot feature then pick gold coins which determines whether you’ve won the Mini, Minor, Major or Grand Jackpot.

Is there a Beast of Wealth free spins feature?

The Free Spins feature is triggered in the usual manner by landing 3 or more scatters on the same spin. You’ll receive 8 free spins. Before the round starts, choose 1 of the 4 beasts which will appear stacked throughout the feature.