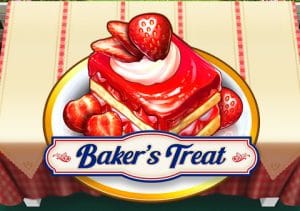 WHERE TO PLAY Baker’s Treat SLOT

Try and become master baker and cook up a cake full of coins in Baker’s Treat, a 5 reel, 15 payline win both ways video slot from Play ’N Go. Highlights of this contest include Flour Power extras that awards extras including wild reels, duplicated reels and symbol upgrades. There’s also a free spins round where the extras hit on each free spin. Play on all devices from between 15p and £75 per spin.

It’s immediately obvious that Play ’N Go has taken plenty of inspiration from a certain television baking show in Baker’s Treat. The reels are set out like a cake table ready to be judged. On those reels, you’ll see lower value green, purple, orange, yellow and pink macaroons as well as more lucrative cupcake, blueberry pie, carrot cake and lemon cheesecake symbols.

The best of the standard symbols is the strawberry sponge which awards 2, 8 or 40 times your bet if you land 3, 4 or 5 on the same payline. The same awards are on offer from the wild which replaces all other symbols and can land anywhere on all 5 reels.

You’ll notice that there isn’t a scatter – instead, each reel is associated with a specific higher value cake symbol. Above each reel you’ll see a meter. Once you’ve landed a cake symbol on its associated reel 3 times, you’ll trigger a Flour Power Spin feature. Goodies on offer here include symbol upgrades, wild reels and duplicated reels.

Land all 5 of the cake symbols on their linked reel on the same spin and you’ll activate the Bake Off feature – here you’ll be awarded a series of free spins with all of the Flour Power Extras hitting in turn. Hope to see a stacked symbol on its associated reel as this awards up to 10 more Bake Off spins, complete with their potentially very tasty extras.

As you’d expect from a video slot with this theme, the design here is light and fluffy. You can’t say that about the volatility though as its sky high with potential desserts of 5,000 times bet per spin.

Baker’s Treat is aimed squarely at fans of the Great British Bake Off. Even if you’ve no idea who Paul Hollywood, Mary Berry or Prue Leith are, the range of extras and volatile action still make Baker’s Treat worth a spin. If we’ve whet your appetite, Play ‘N Go’s Sweet Alchemy and Village Kid should do the trick.