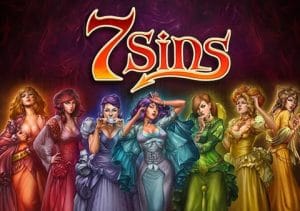 WHERE TO PLAY 7 Sins SLOT

Feeling a little naughty? Why not then give 7 Sins a go. It’s a devilishly entertaining 5 reel, 243 ways to win video slot from Play ‘N Go that comes with single and double wilds and a bonus feature that awards 7 free spins with stacked symbols and an expanding multiplier that reaches 7x. Play, on all devices, from between 10p and £100 per spin.

Somewhat unusually, 7 Sins comes with not 1 but 2 different wild symbols. The Lucky 7 is the standard wild – it appears on reels 1, 3 and 5 only and replaces everything bar the scatter. The second wild is the Double Lucky 7 – this one can land on reels 2 and 4 only.

When it forms part of a winning combination, it counts as 2 symbols. If you land a winner that includes both double wilds, it’s possible to create a 7-of-a-kind combination with bumper payouts to match. For example, 6 of the highest paying woman awards 16 coins. A full 7 offers a far more impressive 250 coins.

The other symbol to look out for is the Pandora’s Box which is the scatter – when this hits on reels 1, 3 and 5, you’ll trigger the Free Spins feature and with it 7 free spins. On each free spin, 1 of the 7 sin women will be frozen fully stacked on the middle reel while the other 4 reels spin.

The feature starts with a 1x multiplier on the first free spin, rising by 1 on each free spin that follows. By the 7th free spin, you’ll be playing with a 7x multiplier!

As you’d hope given the theme, 7 Sins is a very volatile slot – expect plenty of lean spells where your bankroll will head down, down, deeper and down. It’s possible to win big in the bonus feature though courtesy of the stacked symbols and ever-increasing multipliers – to the tune of 1,580 times your stake.

With its potentially explosive bonus feature, 7 Sins offers plenty of temptation. Get lucky with the free spins and this spicy slot can be a real scorcher. I also recommend Grim Muerto which Play ‘N Go’s best game in my opinion.