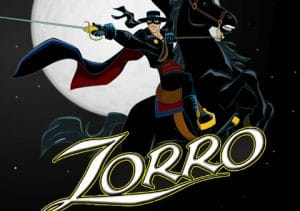 Zorro is an Aristocrat-powered video slot based on the fictional character that has appeared in book, films and television series. This game takes you on an adventure with plenty of bonus features. Featuring 5 reels and 25 paylines, you can play from 25p a spin to £125 – saying that, in order to activate the bonus features, you need to click on the Zorro Bonus button to play from £1.05 a spin to £175 a spin (10 credits are added).

The main attraction of Zorro is the Zorro Bonus feature – you need to press the Zorro button in the bottom right-hand corner to be able to activate it. Anyway, to trigger the feature, you need to get the ZORRO letters across the reels. You will then play 1 of 5 bonus features at random.

You have the Wild Z feature where 3 free spins are awarded. During every free spins, a ‘Z’ is placed randomly on the screen and will remain in place for the entire free spins. Then there’s the Magic Door feature where you click on a door to reveal Zorro, Juliana or Monastario. You will receive 5 free spins and when your revealed character appears, you will win a cash prize. You can win up to 1,000 times your line stake.

Finally, there’s the Barrels feature which is the free spins game. You can choose between the follow free spins options:

I would recommend the 10 free spins option as you get enough free spins to have a chance to win up to an 8x multiplier. Lastly, there is a standard Aristocrat Gamble feature where you can gamble your winnings up to 5 times. The Zorro slot is a little dated in appearance but the Zorro Bonus feature makes up for that. I quite like the Aristocrat slots (reviews coming soon!) due to them being simple and have good free spins features. If you like classic slots, you should try some of the WMS or IGT titles like Zeus (WMS) and Cleopatra II (IGT).