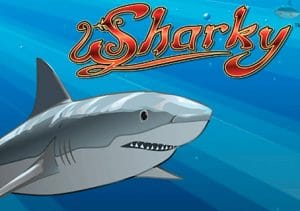 WHERE TO PLAY Sharky SLOT

Grab your cutlass, it’s time to go jackpot pillaging in Sharky, a pirate themed slot from Novomatic. It’s a fast-paced, f5 reel, 9 payline slot that comes with a free spins feature and extra wilds. Stakes range from between 9p and £90 per spin. Will it have you winning booty galore or will you end up walking the plank? Let’s take a closer look.

Sharky looks like a typical Novomatic slot. The simple graphics won’t win any awards and neither will the soundtrack which is typically underwhelming. The visuals are all pretty clear though, set against a white background, which is the main thing.

The symbols include parrots, treasure chests and swords as well as the standard playing card offerings. The pirate is the wild, substituting for everything apart from the scatters. It’s the biggest payer, offering 500 times your line bet for a 5 symbol combo. Sharky comes with 3 scatters, the pirate ship, the treasure island and the compass. Find the ship and the Treasure Island to trigger the Free Spins feature.

To start with, you’ll be awarded 10 free spins – if the pirate ship hits on reel 1, the pirate in a rowing boat will be lowered onto the reel. The pirate acts as a wild and substitutes for all symbols apart from the scatter. With each spin, he’ll row across 1 space on the reels.

If he finishes adjacent to a treasure chest symbol, he’ll swim across and grab the loot, awarding a cash prize of up to 50x your bet in the process. If the shark appears, it will sink the rowing boat, ending the pirate’s journey. It’s possible to have more than 1 pirate on the reels at any time, boosting the wilds and potential wins. It’s possible to re-trigger the free spins too if the pirate ship and Treasure Island symbols appear again.

Like most offerings from Novomatic, Sharky is a decidedly volatile affair. The variance is on the high side of medium so despite the watery theme, expect some dry spells. The free spins are the best route to hauling a treasure chest full of coins. They won’t hit that often but can be lucrative when they do arrive.

Sharky certainly won’t win any beauty contests. The gameplay is fast though making it a real entertainer and a welcome addition to the crowded pirate genre. If pirate themed slots are your thing, Red Flag Fleet by WMS is very good as it’s a clone of the popular Zeus III game.