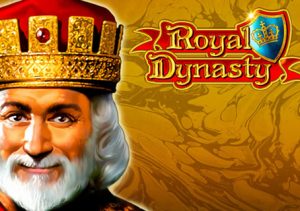 WHERE TO PLAY Royal Dynasty SLOT

Join medieval nobility in Royal Dynasty, a super volatile, 5 reel, 20 payline video slot from Novomatic. The chief attraction here are wild wins that pay double and a bonus feature that awards up to 90 free spins with a second wild symbol added to the reels. Pay homage to his majesty, on all devices, from between 40p and £60 per spin.

The design on display in Royal Dynasty is pure Novomatic – the lower value playing cards are written medieval style. They’re joined by gold coins and a heraldic shield, a bird of prey and a lion statue and a courtier.

The king, resplendent in bushy white beard and crown is the game’s wild – he substitutes for all other symbols apart from the 2 scatters. The wild offers payouts of 0.5, 10, 60 or 250 times your total stake if you land 2, 3, 4 or 5 on a single payline in the base game. Those number are doubled in the feature round – when the king forms part of a winning combination that features standard symbols, that payout is boosted by a 2x multiplier and doubled.

This is an extremely volatile slot – the sky-high variance means big potential swings for your bankroll. You can go lengthy spells without troubling the cashier at all. Trigger the free spins then get lucky with the extra wilds and some spectacular results are possible.

Royal Dynasty is a classic Novomatic video slot – you’d be hard pressed to call it a thing of beauty. Who cares about that if you get lucky in the free spins round though. With it’s extremely high variance, this isn’t a game for the faint of heart. High risks can also mean big rewards – if have the bankroll to cope with the undoubted big swings, Royal Dynasty offers some regal entertainment.