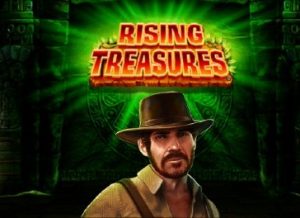 WHERE TO PLAY Rising Treasures SLOT

Take on the persona of an intrepid jungle explorer and go hunting for lost riches in the Rising Treasures slot. Boosting you chances of finding some of that loot are expanding wilds which can appear in the base game and the bonus round. Trigger that bonus round and you’ll receive free spins, complete with special wilds that can upgrade the value of symbols for the rest of the round. Found out more about this medium to high variance slot in our detailed Rising Treasures review.

Novomatic is a developer that likes to keep things simple and that’s certainly the case with Rising Treasures. There isn’t a huge amount to report on the features front. There are a couple of extra well worth taking note of though including expanding wilds and free spins.

Wilds can land on reels 2, 3 and 4 only. When they do appear, they expand and turn the whole of the reels wild. It’s possible to land multiple wilds on the same spin which can lead to some big results depending on what’s on reel 1.

Known as the Expanding Wilds feature, you could end up with 3 wild reels on each base game spin. The expanding wilds can prove even more useful during the Free Games feature too.

The gold icon holding the diamond is the scatter symbol. Land 3, 4 or 5 of these on the same spin and you can look forward to a payout of 5, 20 or 50 x your total stake. You’ll also trigger the Free Games feature.

On offer here are 12 free spins. Just like in the base game, the wild expands to fill the whole of the reel when it appears on any of the middle 3 reels.

Each time a wild hits, it also upgrades 1 of the higher value (i.e. non-playing card symbols). There are 6 of these higher value symbols in total. The most rewarding being the adventurer. Land 3, 4 or 5 of him on a payline and you’ll pocket an award of 5, 12.5 or 25 times your total bet.

Land 1, 2 or 3 wilds on the same free spin and you’ll also get another 1, 3 or 5 free spins added to your total. These come in addition to the expanding wild and symbol upgrades.

The Rising Treasures slot uses a classic 5 reel, 3 row 20 payline game engine. Winning combinations are formed by landing 3 or more matching symbols in a payline, starting from reel 1. You won’t find much more straightforward game engines than this.

Stake levels range from between 20p and £100 per spin. Click on the auto button to get the autospins rolling. These run indefinitely so keep your eyes peeled. You can see win and loss limits here too.

Like many a slot in the Novomatic catalogue, the simple gameplay is combined with some pretty strong variance. The Rising Treasures volatility isn’t as high as some of the developer’s releases but it’s well north of medium and delivers some high risk, but potentially high reward action. The max win per spin is 1,000 x your stake.

The Rising Treasures RTP is 95.02%. Whilst this is on the lower end for an online slot, most Novomatic slots offer this kind of range unfortunately. This means that you’ll win back £95.02 for every £100 you bet on average. If you take a game like 1429 Uncharted Seas by Thunderkick, the RTP is 98.5% which is a huge difference.

The design in many Novomatic slots is as simple as the gameplay. Rising Treasures is a typically unfussy slot from the developer. It certainly won’t be troubling the awards panels for its visuals. Set against a backdrop of dense, jungle foliage and a ruined temple, the plain black reels feature A to J royals plus 6 higher value symbols that relate to the treasure hunting theme.

In order of value are a gold chalice, an emerald encrusted necklace, a hunting horn, a pot, a chest full of treasure and the intrepid explorer. The explorer looks rather like Indiana Jones. The jungle pyramid/temple is the game’s wild. As usual, this substitutes for all the standard symbols when it forms part of a winning combination.

The visuals are instantly recognisable as coming from a Novomatic slot. You won’t find the usual bangs and bleeps backing track that usually accompanies a Novomatic game though. There’s something far more stirring and orchestral playing in the background which is rather good and ramps up the atmosphere.

The game interface is the standard Novomatic set up. It’s straightforward enough but requires a couple of clicks to get to the paytable via the menu tab.

Everything we’ve written about the desktop version applies to Rising Treasures mobile slot. The design isn’t the flashiest but it does the job well enough on the smaller screen. The simple gameplay is perfectly fine on a mobile or tablet device too.

We don’t fire up Novomatic slots expecting lush design and complicated extras. What we do expect is simple, volatile gameplay and that’s just what’s on offer in Rising Treasures. The expanding wilds feature is a potential cracker, especially during the Free Games feature when it can deliver symbol upgrades too. This makes it easier to achieve the maximum 1,000 x bet payout per spin.

The Indiana Jones-style slot has been a hugely popular theme. Simple it might be but Rising Treasures shows that there’s still room for new arrivals on the crowded virtual shelves of the casino treasure hunter. If you want adventure, try Play ‘n GO’s flagship slot, Rich Wilde and the Book of Dead, which is better graphically and offers 5,000 x bet payouts per spin.

❓  What is the Rising Treasures RTP?

The RTP of Rising Treasures is 95.02%. Whilst on the lower end for online slots, this is quite normal for Novomatic slots. If you’re looking for more out of your bankroll, look at alternatives such as slots from Thunderkick or Big Time Gaming.

🥇 What is the Rising Treasures max win?

Rising Treasures offers top wins of 1,000 times your total bet on each spin or free spin. This can be achieved with the expanding wilds which can give you 3 wild reels on every spin or free spin. In the latter, symbol upgrades increase your chances of landing top paying symbols across all reels.

🎰 Is there a Rising Treasures mobile slot?

Yes, you can play the Rising Treasures slot on your Apple or Android tablet or mobile. The simple design and gameplay is well suited to player on a small screen device. You can of course play on desktop devices including laptops and PCs.

⚡ What is the Rising Treasures slot theme?

The jungles of Asia are the setting for the treasure hunt inspired Rising Treasures slot where you’ll join an Indiana Jones-style explorer on a quest for lost jungle riches. It’s very well designed for a Novomatic slot and looks great on all devices.