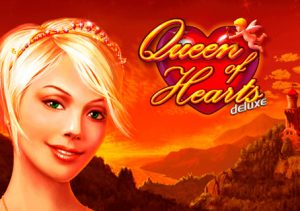 WHERE TO PLAY Queen of Hearts Deluxe SLOT

Cupid is best known for summoning up romance but can the god of love conjure up a jackpot too? That’s what you’ll be hoping for in Queen of Hearts Deluxe, a 5 reel, 10 payline video slot powered by Novomatic. Available to play on tablet, mobile and desktop devices, it comes with a bonus feature that awards up to 40 free spins with cupid adding to your winning chances by randomly adding wilds to the reels. Play from between 10p and £50 per spin.

Novomatic video slots are rarely things of beauty but Queen of Hearts Deluxe is a slight step up from the developer’s often bland looking games – the game has an almost fairytale feel. Joining the lower value playing cards are a gem encrusted ring, a European castle and a crown, all of which offer payouts of up to 50 times your total stake if you land 5 on a payline.

The yellow rose is by far the most rewarding symbol – land 2, 3, 4 or 5 of these for a payout of 0.5, 5, 30 or 300 times your total stake. Even those payouts are dwarfed by the red heart though which is the game’s wild – just 1 of these guarantees a payout, albeit of just 2 coins. Land 5 on a payline though and you’ll pocket 1,000 times your total bet!

Look out here for the animated Cupid who can float onto the screen following any free spin and with a quick flick of his bow can fire arrows and turn a random selection of symbols into wilds. You can re-trigger more free spins here too so hope to see the Queen’s smiling face – there’s up to 40 in total available

This isn’t the most volatile Novomatic video slot you’ll find as the variance here is in the medium range. You won’t be waiting ages to land the feature but there are still some decent rewards on offer.